The Presidential Volunteer Service Awards (PVSA) recognizes U.S. citizens and permanent residents that have achieved a required number of hours of service over a 12-month period. 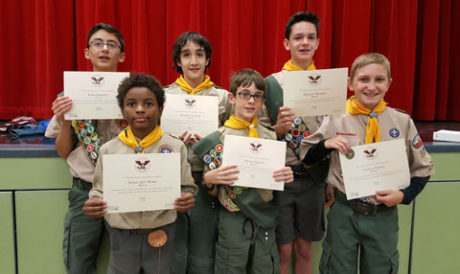 “Troop 329 is proud of our many leaders and members who give of themselves,” said Troop 329 Scoutmaster, Tyler Howland. “A scout is taught to provide a good turn daily, which are often small, thoughtful acts, and are usually provided without any recognition. We are thrilled to recognize these scouts for service above and beyond.”

Scouts were recognized in three categories: Ethan Swartz was presented with the gold award with more than 100 volunteer hours served; Andrew Guzman received the silver award with at least 75 hours served; and Bennett Buisker, Judge “Jay” Hurd, Dylan Swartz, and Charlie Talbot were presented with the bronze award, each having completed at least 50 hours of volunteer service.

The boys volunteered through Boy Scout Troop 329, at local nonprofits, at their church and through an international nonprofit in Puerto Peñasco, Mexico.

The PVSA recognizes, celebrates and holds up as role models, Americans making a positive impact as engaged and deeply committed volunteers. The award enables community organizations—as Certifying and Leadership Organizations—to amplify their gratitude by joining with the President of the United States to recognize their most dedicated volunteers. Boy Scout Troop 329 became a certifying organization in 2016.