Some of the older, worn-out flags were contributed by veterans, while 18 flags were given to the troop during the Fourth of July celebration held at Royal Palm Park. 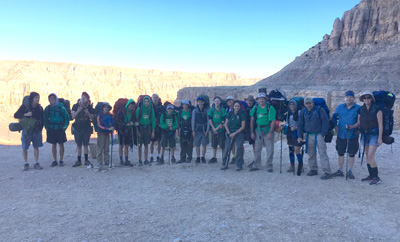 Members of Boy Scout Troop 329, along with troop leaders and parent volunteers, hiked down into the Havasupai Indian Reservation at the Grand Canyon over Fall Break, bringing books for students at Havasupai School in their already loaded-down packs (submitted photo).

The U.S. Flag code states that, “the flag, when it is in such condition that it is no longer a fitting emblem for display, should be destroyed in a dignified way, preferably by burning.”

Thus, when a flag is torn and tattered beyond repair, it’s time for it to be retired. The Scouts placed the flags in a fire as part of the ceremony while veterans, elected officials, the scouts and their parents saluted.

As part of their continuing effort to fulfill the Boy Scout slogan of “do a good turn daily,” the scouts also traveled to the Havasupai Indian Reservation for a four-day backpacking trip over fall break. Prior to the trip, a few of the scouts read a story in a local newspaper about the one school in Supai, which is the only town in the Havasupai Indian Reservation and in the Grand Canyon. Supai is a remote community; the only way to get to there is by hiking, riding an animal or taking a helicopter.

The school teaches only English and math, and does not possess a school library. So the scouts and parent leaders packed high-interest books in their backpacks and hiked them down into the canyon, 8 miles into the town of Supai. Some of the books were from the “Diary of a Wimpy Kid,” “Goosebumps” and “Magic Tree House” series. Since the school was closed for break, they delivered the books to the Havasupai Welcome Center, where they were warmly received.

The Scouts enjoyed their time in Havasu Canyon, including playing in Havasu Creek and exploring and enjoying the spectacular scenery. They hope the books they delivered will provide interesting, new reading materials for the youth of the Supai community.