Lewis honored with ‘Thanks Badge’ 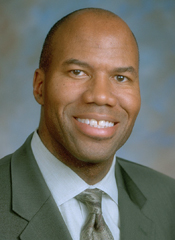 North Central resident Gordon Lewis was one of three adult volunteers who were honored with the Thanks Badge, the highest honor in Girl Scouting, from the Girl Scouts–Arizona Cactus-Pine Council.

This award is given to an adult Girl Scout member whose ongoing commitment, leadership and service have had an exceptional impact on the goals and mission of the entire Council. The criteria for these awards are established by Girl Scouts of the USA and are nationally recognized.

Lewis is a Partner at Jones, Skelton & Hochuli, P.L.C. and a member of the board of the GSACPC, where he has served, for the last eight years, as both a member-at-large and in a non-officer position on the Executive Committee. In April, Lewis was elected to serve another three-year term as Secretary of the board’s Executive Committee. He also chairs the personnel committee and has served on other committees and taskforces.

His thoughtful leadership on issues around financial stewardship, diversity and employment decisions have greatly benefited the organization.