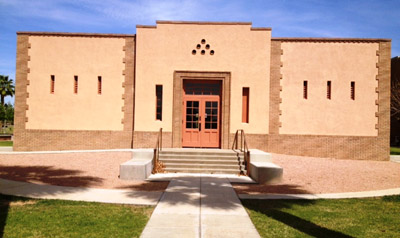 The old band/music building at what was once the U.S. Industrial Indian School, still located on the grounds of what is now Steele Indian School Park, has been renovated and will open to the public during a special event set for Oct. 14 (photo courtesy of Native American Connections).

The renovation project is being led by Native American Connections (NAC) and its partner, the Phoenix Indian Center (PIC). The partners signed a Letter of Understanding with the city of Phoenix in November 2013 to renovate the city-owned property.

Prior to becoming Steele Indian School Park, the land was the site of the Phoenix Indian Industrial School, which opened in 1891 and was then 3 miles from downtown Phoenix. The school was operated by the federal government under the jurisdiction of the Department of the Interior and the Bureau of Indian Affairs.

The boarding school was an attempt to assimilate American Indian children into European-American society and train the boys for jobs in the trades and the citrus industry. The girls were taught domestic skills and later secretarial skills.

Many changes took place during the schools 99-year history. Native languages that were, at first, forbidden were welcomed at the school. Military uniforms that were first issued to students gave way to basic skirts, jeans and tops.

The school and its students played a role in shaping Arizona. The marching band at Phoenix Indian School played at the ceremony marking Arizona’s statehood in 1912. In later years, the band played in two Tournament of Roses parades and also a 4th of July parade in Washington, D.C.

Ira Hayes attended Phoenix Indian and then enlisted in the military, later becoming one of the flag raisers at Iwo Jima. The Veteran’s Affairs Hospital sits on land that was part of the Indian school campus.

The history of the school will be told in the gallery inside the new visitor center, which includes display cases featuring dozens of trophies won by the school’s athletes and musicians over the years. The building first served as the grammar school and students helped build it. In later years it became known as the music building where the choir and the band practiced. It is on the National Register of Historic Places.

Besides the gallery, the new PISVC will have three rooms available for rent. They include an event room that holds 120 people, a classroom, and a commercial kitchen. “We see this space as a being a vibrant place to hold meetings and create economic development,” said Diana Yazzie Devine, CEO of NAC.

The grand opening will begin at noon on Oct. 14 inside of the building at the park. Food trucks will be parked outside, including Emerson Fry Bread and Short Leash Hot Dogs. Speakers include alumni from Phoenix Indian School, and local dignitaries. The event is free and open to the public.