Closing off alleys will cost residents

By Teri Carnicelli
After being lobbied by North Central residents for more than a year, the Phoenix City Council in June unanimously approved a “Gated Alley Pilot Program”—but now it’s up to those same residents to pay for it. 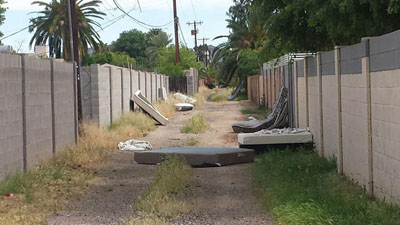 Residents whose homes abut alleyways in the Royal Palm and Sunnyslope neighborhoods have been fighting illegal dumping in their alleys, including these mattresses infested with bedbugs that were left on April 4, and not picked up by the city until May 5 (photo courtesy of Zona Michelena).

Alleys in Phoenix currently serve as access points for utility companies as well as garbage and bulk trash collection. But those same garbage cans also draw illegal dumpers and dumpster divers, and the alleys themselves can provide less visible areas for illegal activity including drug use and theft from the yards of adjoining homes.

“I live in Sunnyslope and also have a family home in the Royal Palm neighborhood,” said Zona Michelena, who has been actively involved in the process of lobbying for the alley gates. “I was raised in this area and have lived here my entire life, over 50 years now. I do have a mother who lives in a house with an alley where there is continual issues of furniture dumping, piles of nails and concrete, drugs, people sleeping outside her back gate, defecation outside her back gate, and strangers knocking on doors and ringing bells at all hours.”

On Nov. 14, 2016, the Public Works Department responded to a memo from Councilmembers Debra Stark (Dist. 3) and Daniel Valenzuela (Dist. 5), requesting an alley solid waste relocation and gate pilot program in the Royal Palm and Sunnyslope neighborhoods. The program incorporates both relocation of solid waste service from the alley to the curbside and installation of gates at the ends of alleyways.

However, the cost to purchase and install the gates will be the responsibility of the homeowners. Costs are estimated at approximately $2,800 per alley for chainlink fencing/gates or $5,000 per alley for wrought iron. Homeowners will be responsible for ongoing maintenance and repair costs of the gates.

Interestingly, city staff studied similar programs in other jurisdictions, including Mesa and Los Angeles. Mesa’s Alley Gate Program began as a pilot in 2008; the current program includes gating all alleys, based on funding availability, at no cost to homeowners.  In fiscal year 2016-17, Mesa spent approximately $182,000 on the program, which includes cleanup of illegal dumping and installation of 6-foot chainlink fencing with locks and keys. Mesa residents have reported the gates reduce illegal dumping, reduce crime, and restrict pedestrian and vehicle traffic.

Similarly, the City of Los Angeles Nuisance Alley Conversion Project allowed homeowners to petition the city for closure of alleys—at no cost to homeowners. Los Angeles provided a final cleaning of the alley prior to closure. Alley maintenance continued to be the responsibility of the homeowners once the alley was closed.

Phase I of Phoenix’s Gated Alley Pilot (GAP) Program would be implemented in six alleys in the Royal Palm neighborhood, which is defined as the area from Northern Avenue to Dunlap avenues, and from 19th to 7th avenues. A program application must first be submitted by a neighborhood representative—most likely someone from the Royal Palm Neighborhood Council—and the application also must include a petition with consent from a majority of the homeowners along the alley. The neighborhood group also must obtain issuance of a revocable permit, and a fence permit to allow for view-fencing gates to be erected in the alley by a licensed contractor. The Public Works Department will fund application fees associated with the program during the Pilot Program.

The Public Works Department staff also will conduct a final cleanup of any illegal dumping in the alley and relocate all solid waste services, including bulk trash, from the alley to curbside. Alleys gated through this program will remain in the right-of-way and the persons in control of the land abutting the alley will continue to be responsible for alley maintenance per Phoenix City Code.

Access to the gated alley will be limited to keyholders, including adjacent property owners, the city, and public utilities. The city will coordinate with utility companies and emergency responders to ensure they have access to the alley.

Michelena, who is excited to see the alleys finally closed off, pointed out that, “With the gate element, there is no reason for anyone to go in the alley, so besides Mother Nature, there should be no activity, which includes dumping or other ‘miscellaneous’ activities.”

She also praised Stark and Valenzuela for working closely with the Royal Palm neighborhood to get the pilot program off the ground. “Both Councilwoman Stark and Councilman Valenzuela have been working closely with the Royal Palm Neighborhood Council for many months on this issue. Without their diligent involvement with the community, this pilot program may have taken much, much longer to come to fruition, if at all.”

“The Gated Alley Pilot Program is a step in the right direction where the city of Phoenix is attempting to help address complex issues of crime and blight in Royal Palm—a neighborhood that volunteered to be a test area for us to gate off alleys and study its effects,” said Stark. Phase II of the program will be offered in the Sunnyslope community, which Stark also represents. For the purposes of this program, Sunnyslope is defined as the area from the Grand Canal to Mountain View Road and from Central Avenue to 12th Street.

“I am so thankful to my colleague Daniel Valenzuela and city staff for the hard work and effort it took to come up with a solution that all parties could agree with, and to the Royal Palm neighborhood leaders who were so helpful, patient and involved in the process,” Stark said. “I hope that the program yields positive results, and look forward to reviewing them at the 6-month and 12-month marks. In the meantime, I will also be working with city staff to try and identify funding sources so that the program can potentially be implemented next in Sunnyslope, and eventually in any interested neighborhoods in Phoenix.”