The Arizona Animal Welfare League has released a 2017 calendar made entirely by volunteers to raise money for its no-kill shelter. It features local models posing with adoptable animals from the shelter—all of which have found forever homes since the calendar’s release. 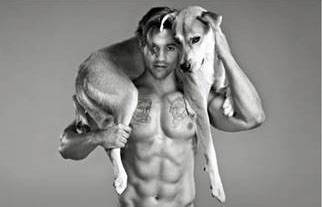 Nicholas Czapinski, a Purple Heart veteran and devoted dog owner, poses with shelter dog Chanook, a yellow lab mix—who has since been adopted—as part of the AAWL 2017 calendar (photo by Eric Cassee).

It’s the second year of the “Models | Mutts | Meow” calendar, and it’s proving just as popular as last year, says Whitney Steele, the creator and organizer of the annual AAWL calendar and the shelter’s director of volunteer and  events.

The models, the professional photographer and the shelter pets donated their time to this worthy cause. The models are from The Agency Arizona, and the photographer is Eric Cassee.

All the animals used for the images were up for adoption at the time of the shoot (many of them long-timers), and during the shoot they became very comfortable and friendly with the models.

The calendars are available for purchase online at www.aawl.org, and are $15 (plus shipping). You can purchase them in person at the Phoenix shelter at 25 N. 40th St., or at any of the shelter’s adoption events around the Valley.