The 10-episode series is set to debut on Animal Planet on Sunday, Feb. 19 at 10 a.m. The series, which currently is airing overseas, will be broadcast in approximately 180 countries. The four-month production schedule began in April of 2016. 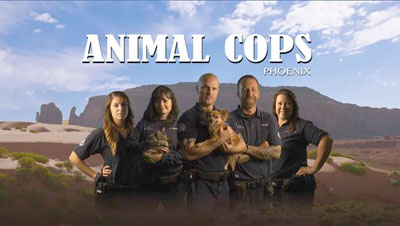 The field operations team is backed by AHS’ Second Chance Animal Trauma Hospital™, the largest shelter-based trauma hospital in the Southwest, as well as a behavior team comprised of animal welfare specialists and a foster hero program of more than 600 foster families and individuals, and make an animal’s journey to adoption possible.

“Animal Cops Phoenix” is set against a backdrop of stunning mountains, dramatic desert, and a climate that can be punishing one day and paradise the next. Each episode highlights a behind-the-scenes look at the work of AHS, and the professionals who, although very different, are united by their love of animals and their desire to step in and change the course of an animal’s life.

For the latest news on Animal Cops Phoenix or to view cast bios, visit www.azhumane.org/animalcops.