Prior to the start of the 2016 Olympics, Arizona’s youth were competing at the 71st Annual America’s Youth on Parade (AYOP) Baton Twirling Championships, held July 26-30 at Notre Dame University in South Bend, Ind. 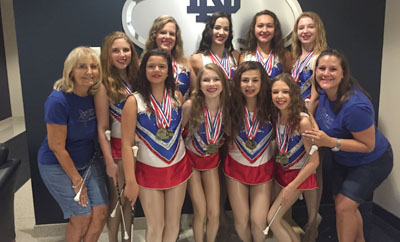 This was Coach Becky Hewitt’s 41st year to take the Phoenix Superstars, a twirling team composed of nine girls from the Valley, to compete in team events as well as individual solo events. Hewitt, a longtime North Central resident, began taking her daughter, Lisa, when she was 8 and this year took her two granddaughters—Alaina, 13 and Madysin, 10.

Accompanying Hewitt was Assistant Coach Sarah Ewart, who began twirling with the team when she was 6 years old. The girls trained once a week during the school year with the Arizona Twirling Athletes, a nonprofit youth twirling organization, and then attended a four-day twirling camp at the Wigwam Resort. The twirlers commenced with daily practices in the gym for four hours a day during June and July.

The rigorous schedule paid off as usual when the team arrived home with 49 medals, two trophies and five award plaques. Highlights for the team included capturing first place in the Senior Small Twirl Team, a second place, a third place, a fifth place and a ninth place on their various Twirl and Dance Twirl Teams, ranking them in the top 10 in the United States.

Hewitt will begin a program for interested beginning students between the ages of 6 and 16 in September in five different school districts. For more information, call 602-743-2681.