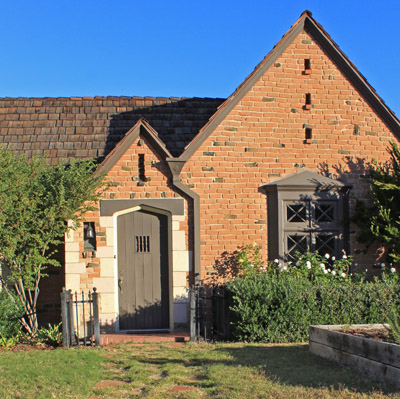 Steve and Beth Postma’s house at 248 E. Orange Ave. is on this year’s Windsor Square Home Tour. It is one of the first homes built in the area in late 1929. Living across the street and admiring this home since 1993, the Postmas purchased it in February of 2012 and restored much of the home to its original glory (submitted photo).

Presented by the Windsor Square Historic District, the 10th biennial Historic Home and Garden Tour is a self-guided walking event allowing home and design enthusiasts to get a glimpse of architectural features and styles in 12 homes and gardens, constructed in the 1930s and ’40s, in the neighborhood bordered by Central Avenue, 7th Street, Pasadena Avenue and Oregon Avenue.

Beer gardens, a tree house, personal libraries, horticultural, only-in-Phoenix architectural flourishes and a zip line are all part of the self-guided fun during which walking participants can learn about their architecture, history, and decoration.

Home tour explorers also will be able to check out offerings of fine arts and crafts from street vendors, enjoy some of the Valley’s best food truck fare and listen to live music from local musicians. The cost for this year’s 10th biennial tour is $15, and children 11 and younger are admitted free.

Tickets are available for purchase online in advance at www.windsorsquarephoenix.org as well as day-of-tour at Orange and 2nd Street, which is located one block east of Central Avenue and just north of Camelback Road. Free parking and bike racks available.