City is part of effort to launch little libraries

By Teri Carnicelli
It looks like a child’s dollhouse, except that instead of furniture and little dolls in the cubbyholes, it is filled with children’s books for a variety of age levels.

The newly unveiled “little library” inside of Roy’s Barbershop at 3334 N. 19th Ave. is the first of 10 to be rolled out through a new partnership with the city of Phoenix, local businesses like Roy’s, Habitat for Humanity, and city school districts serving low-income populations. 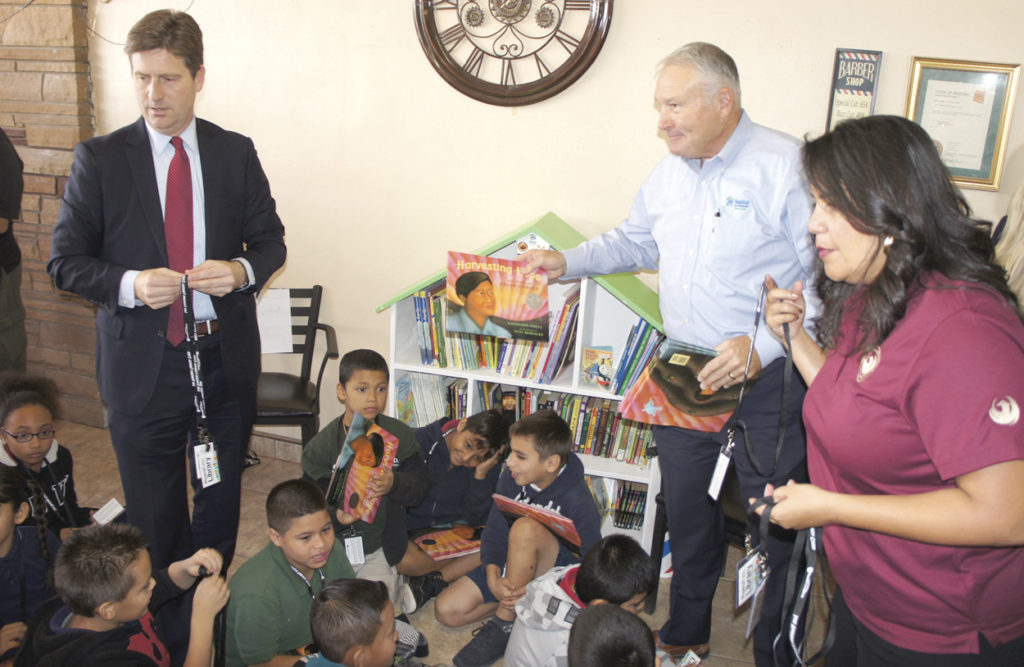 Celebrating the launch of a Little Free Library inside Roy’s Barbershop at 19th Ave. and Osborn Road are some neighborhood schoolchildren from Maie Bartlett Heard School, along with (from left) Phoenix Mayor Greg Stanton, Jason Barlow, president and CEO of for Humanity of Central Arizona, and Dist. 4 Councilwoman Laura Pastor, who hand out free books and library lanyards to the children (photo by Teri Carnicelli).

The inspiration came from Little Free Library, a national movement to build free book exchanges across the country, and Read on Phoenix (ROP), a program dedicated to ensuring that every child in the city will have the skills and resources necessary to read at or above grade level by the end of third grade.

Tim Valencia, director of Youth and Education for the city of Phoenix, liked the concept of the Little Free Library, which is a community collaborative where families and kids can pick-up or drop-off free books at a designated space. He wanted to find a way the city could create these pocket libraries in underserved parts of the community—without having to spend any city tax dollars.

He contacted Habitat for Humanity of Arizona, well known for building much larger “houses” for lower income families. Valencia got a positive response back.

“When we got the call to help with the little libraries, we were delighted,” said Jason Barlow, president and CEO of for Humanity of Central Arizona. “It’s a great idea, to take a book and leave a book, or read a book while you are here in the barbershop. Literacy is so important to kids as they are growing up.”

Habitat provided the supplies and the construction of the dollhouse-like structure, which was built by Habitat volunteer Wayne Needham. Habitat also is developing a model that can be placed outside if needed.

The owner of Roy’s Barbershop, Oralia Hernandez, was excited to be the first site of the new little libraries that will be popping up at businesses around the city. Her shop services a large number of families with multiple young children, who will now have something to occupy their time while they wait.

“We are now making it even easier to go to the library,” said Mayor Greg Stanton at the mini-library’s official launch on Nov. 16. “You don’t have to go downtown or to a city branch. We are trying to bring libraries to as many kids around the city as possible, and we need more businesses who are supportive of great programs like this.”

“Little Free Libraries are a great way to promote literacy in the community,” says Councilwoman Laura Pastor, whose district Roy’s Barbershop is in. “But most importantly, reading proficiency will increase if more reading materials are available to kids in their homes and community.”

Each mini library will be officially registered with Little Free Library, which well send a commemorative plaque to be placed at each site.