In 1978, Wallack founded specialty running gear store, Runner’s Den, in Phoenix. Many would consider this to be the first running footwear store in Arizona. A few years later, Wallack created Raceplace Events, a data processing company for athletic events, launched in 1981. 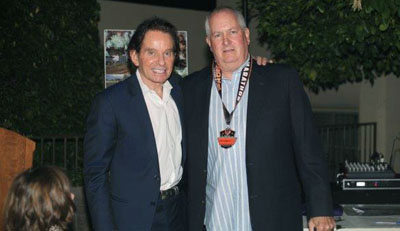 Through his company, Raceplace Events, and his involvement in the staging of hundreds of running/multisport events, Wallack played an integral part in building the running and fitness community of Arizona. In addition to Runner’s Den and Raceplace Events, he also founded Raceplace Magazine and GetSetUSA.com.

After 30-plus years in the business, Wallack has stepped back from Raceplace Events. Wallack’s longtime store manager, Ron French, the staff at Runner’s Den and his son, Nate, will keep the company on the right track for many more years.

Wallack was recognized with other inductees during a special dinner held at the Camelback Inn on Nov. 4 to kickoff the 41st Annual 3TV Phoenix 10K & Half Marathon, held on Nov. 6 and benefiting the Mollen Foundation.

The Arizona Runners Hall of Fame, created in 2011 by Dr. Art Mollen, honors these individuals—both living and posthumously—for their quintessential commitment to the health and well being of the Arizona community and for facilitating the rising of Arizona to the pinnacle of running in the United States.

Mollen was the first person Wallack met after he moved to the Valley. The pair met in the summer of 1978 when Wallack was out running. After the introductions, Wallack shared his plans for Runner’s Den and Mollen immediately jumped on board and became an advocate for it.

At the 2016 Runners Hall of Fame, Wallack decided to present an award to Mollen to honor him for his own contributions to further running in Arizona.