Storybook recounts life in a ‘grandfamily’

Growing up can be stressful enough, but imagine doing so if your parents were not around. Arizona State University graduate student Brittany Avent shared the joys and struggles of being raised by her grandparents, who live in North Central Phoenix, in a new children’s book that was released at a special event last month. 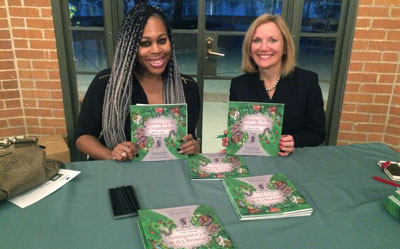 Avent and author Dr. Nichola Gutgold co-wrote “Growing Up in a Grandfamily, Within Our Chosen Family Village” about Brittany and her younger brother, Bryant’s experiences being raised by their grandparents. The nonprofit interfaith organization Duet held a book signing Nov. 4 at the Encanto Park Clubhouse. Avent and Gutgold signed and gave away copies of the book to grandchildren being raised by their grandparents.

Many children listened intently as Avent read passages from the book at the event, which drew dozens of people and supportive community partners including SRP representatives and Phoenix City Manager Ed Zuercher.

The goal of the book is to show to children being raised by their grandparents or other relatives who are not their parents that they are not alone. The children’s book also gives helpful tips on how grandchildren and grandparents can build strong connections and lead happy family lives.

“I wish I had had a book or anything that would have helped me understand what being raised in a grandfamily was all about so that when children asked me why old people were bringing me to school and picking me up after school, I could have had some answers,” said Avent. “Dignity and pride are what my brother and I feel, and I hope this book will encourage all children raised by grandparents to feel the same.”

Avent graduated last year with a bachelor’s degree in Interdisciplinary Studies from ASU and is working on her master’s degree in the W.P. Carey School of Business at ASU. She started a club on campus for other students raised by grandparents.

The Avent family and other private donors also raised funding to endow the Brittany Nicole and Bryant Nicholas Avent Grandfamily Scholarship to provide financial help to a student whose primary childhood caregivers were their grandparents.

Part of Duet’s mission is to help grandparents who are raising grandchildren. The organization offers support groups, workshops on gaining guardianship of grandchildren and fun activities for grandfamilies around the Valley. For more information, visit www.duetaz.org or call 602-274-5022.