Each Eagle Scout candidate selects a project, devises a plan, raises the funds and purchases or has supplies donated, gathers volunteers, and completes the project. Once the project is completed, along with many merit badges and rank advancements over the years, Eagle candidates must create a final report and pass a Board of Review at the district level. 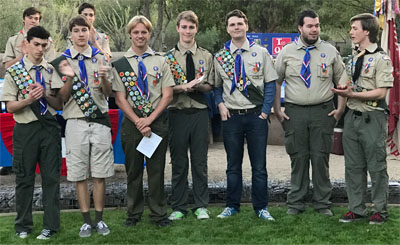 Those receiving their Eagle Scout rank this year included Caelin Cox-Gonzalez, who was awarded in March.    For his Eagle service project, Caelin planned and led a group of scouts, siblings, friends and parents to convert two storerooms into a teacher’s lounge at the Weekday School at First United Methodist Church in Phoenix. The group sorted through piles of old games, toys, books, records, organizing what was useable, donating items to a resale center, and throwing out the rest.

The group tore out old carpeting, filled a dumpster with trash, and also cleaned and disinfected the rooms, which had become rat infested.

Two scouts were awarded in April. Anuj Patel built a composting system at Sonoran Sky Elementary School to help the gardening program at the school. It will be used to help teach science to the third grade classes. Spencer Sandvig built a split-rail fencing entry feature to the Spur Cross Ranch Conservation Area in Cave Creek. The new fencing was added to remove and replace an existing rusted barbwire fence that was a hazard to the wild life, horses and hikers.

Receiving his award in June, R. Alec Arthur refurbished the Capri 14.2 sailboat fleet for the Arizona Sailing Foundation Youth Programs. He coordinated the efforts by hauling boats from Tempe Town Lake to a remote boatyard and repair facility where a large group of adult and teen volunteers lifted, cleaned, repaired and polished hulls in preparation for a new season.

Two additional scouts were awarded in September. Tatum Quinley built a flagstone walkway and patio, with flower boxes and a new shade tree, for an outdoor area students at Villa Montessori School can use. Sam Reiss upgraded and restored a desert tortoise habitat for ANLC (Arcadia Neighborhood Learning Center) by rebuilding the pond and replacing plants for the partially destroyed habitat. Children utilize the habitat for studying the relationship of the tortoise and the desert plants in our environment.

Connor Mattison, who received his Eagle Scout ranking just last month, worked on a curb-appeal project for the VA Veterans Home at 7th St. and Indian School Road. He and a group of volunteers trimmed the bushes, scraped the rust off the metal fence and repainted the fence.

Troop 41, currently led by Scoutmaster Brian Cook, has a long, notable history in the Phoenix area. It was formed during the 1930s and has met continuously at Madison No. 1 since its inception. Thousands of boys have passed through the ranks of scouting in the troop, and more than 170 have earned their Eagle Scout ranking. Cook received his from the troop in the 1980s. Visit the troop’s website at http://bsatroop41az.org for a list of members from the community who have received the rank of Eagle Scout over the last 80-plus years.

Weekly meetings are held at Madison No.1 at 7 p.m. on Wednesdays. The annual BSA Troop 41 Christmas Tree Lot returns this year at 1104 E. Northern Ave. The hours are weekdays, 4-9 p.m., and weekends, 9:30 a.m. to 9 p.m. The lot will be opened through Dec. 18 (or until all the trees are sold). The tree lot is a service operated by the scouts to raise funds for troop camp and summer adventure trips.