Parents frustrated with school board decisions

By Teri Carnicelli
A group of parents, along with current and former educators both inside and outside the district, are at odds with the Madison School District Governing Board over two recent votes the board has taken that the group says are negatively impacting children in the district. 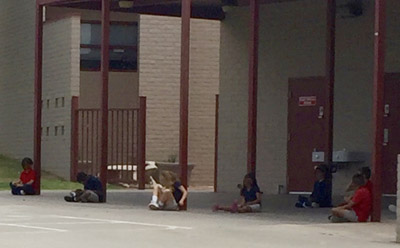 A half-dozen Madison Heights second graders “sat on posts” during their only recess on May 18. A group of parents and educators has asked the Madison District Board of Directors to end this practice of removing recess as punishment for individual students, but the board adopted a policy that only prohibits the practice for whole classrooms (submitted photo).

The first was a vote on May 3 to implement a bare-bones policy regarding recess activities at the Madison schools. Previously the district had no stated policy; the new policy, while encouraging a 20-minute recess each day, leaves the time and place up to each individual school administration, and does not guarantee the full 20 minutes.

Board members pointed out the complexity of organizing a school day, with each campus’s own challenges and limitations, and therefore they believe the decision on how and when recess is implemented is best decided by the on-site administrative team, working with the school’s teachers.

“Madison will continue to allow each school to determine how recess is structured,” Superintendent Quinn Kellis said. “Teachers are aware of the importance of giving the brain a break and re-oxygenating through physical activity.”

Parents were hoping to work with the district to add more recess back into the school day or, at a minimum, guaranteeing the full 20 minutes, and were disappointed with the board’s apparent lack of interest in pursing the matter further.

More recently, the board voted on a revision of its Discipline Policy. The policy was amended in part to state that the withdrawal of recess as punishment for an entire class is not appropriate. However, parents note that individual students frequently are punished with the denial of recess, whether for behavioral issues or to make up class work that was unfinished, and that practice should have been included in the policy revision as well. Children with excess energy may have behavior issues and withholding a recess break is akin to keeping medicine from a sick person—in other words, it’s counterintuitive, they argue.

Since at least 2009, and affirmed in 2015, the Arizona Department of Education’s Physical Education standards prohibit the withdrawal of recess to punish classroom behavior or for make up work. But the Madison District’s policy only explicitly bans “whole class” punishment.

“We’ve repeatedly asked why the district is rejecting the state standard, but there has been no response,” says Christine Davis, a parent with two children at Madison schools who started the call for more recess added back to the school day and a ban on withholding recess as punishment for any reason.

“Given the model/trending policies out there, this remains a rubber stamp on marginal practices, not a good policy to remedy a real problem,” Davis says. “It is clear this strategy does not work for the students who repeatedly endure it, which results in their neglect.”

The frustrated parents are aware that three of the five board members are up for re-election in November and may ultimately try to use that as an opportunity to change the makeup of the board with new representatives who might be more sympathetic to their cause. For more information, visit Madison Parents for Recess on Facebook.