By Teri Carnicelli
The Madison Elementary District Governing Board is reviewing a policy drafted by Superintendent Quinn Kellis that would more formally set in place its practices related to recess, much to the chagrin of many parents and students, who want to see the policy expanded rather than left more or less the same. 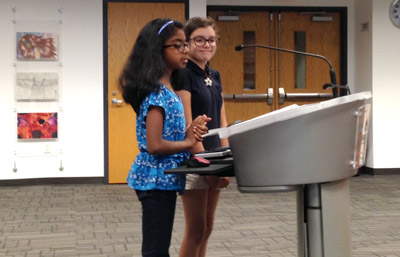 Amutha Rajasundaram, left, and Sally Fielder, both fourth graders at Madison Heights, speak to the Madison Elementary District Governing Board at its April 19 meeting about the health benefits of being active at recess as well as the opportunity to socialize with friends, which they can’t do in the classroom without risking getting in trouble (photo by Teri Carnicelli).

The district has no formal policy in place, other than general health and wellness guidelines as set by the Arizona Department of Education. It has been the district’s policy to allow each school’s administration to set and implement its own recess policy, based on the school’s schedule, space, time and other limitations including available supervision. This has resulted in some schools receiving longer or multiple breaks while other schools offer a short break after a short lunch, which tends to mean students get either one or the other.

The draft policy states that, “A minimum of 20 minutes of physical activity shall be provided by schools for all K-8 students daily. The requirement can be achieved through a regular physical education class and/or through activities such as recess, dance, classroom energizers, or other curriculum-based physical activity programs.”

The policy further states that students should use the time to use the restroom, reenergize and socialize with friends.

Sandi O’Connor has two children at Madison Traditional Academy. “They are given one brief break for lunch. This should not be counted as recess. They choke down their lunches—or some kids, like mine, skip eating entirely—so they have time to play. Kids also have to stand in line to use the restroom and wait, meanwhile their 20 minutes are ticking down.”

As for the “either/or” statement in the policy, Nathan Duran, a fifth-grade student at Madison Meadows, told the board, “Some of you are thinking P.E. is a time to run around. Guess what? P.E. is only once every six days. In P.E. I never saw anyone break a sweat. Our time was spent switching classes, lining up and organizing. P.E. is not that often or that active.”

More than a dozen parents and a handful of students spoke before the board at its April 19 meeting pleading for a policy that would permit more free play, more breaks and ultimately more time for the board to fully examine what other schools around the state and country are doing to bring back more recess. As of press time, the board was set to vote on the presented policy at its May 3 meeting.

“Madison will continue to allow each school to determine how recess is structured,” Superintendent Kellis said. “Teachers are aware of the importance of giving the brain a break and re-oxygenating through physical activity.” He points out that teachers often implement short in-class breaks that could include dancing, jumping jacks, or event a quick trip outside. “None of that is mandated; it is up to each teacher to decide what is best for their classroom and when.”

Kellis says this new policy will continue the school-based decision process while ensuring that time is allotted for physical activity.

Parents nonetheless argue that the policy does not go far enough, pointing out that 20 minutes out of a seven-hour day is simply not enough time for students to burn off excess energy and stress and be mentally prepared for the rest of the school day.

“The proposed policy just codifies what we have today, which doesn’t support our children,” said Eric Morrison, a father of three children who have attended a variety of Madison schools, including Camelview, MTA, Park, Rose Lane and Heights. “One 15-20 minute period after lunch just isn’t adequate. We need a policy that reflects the excellent research that is out there.”

Heights’ fourth graders Amutha Rajasundaram and Sally Fielder made a dual presentation to the board, pointing out the health benefits of being active at recess as well as the opportunity to socialize with friends, which they can’t do in the classroom without risking getting in trouble.

Several parents asked the board to at least take the time to review the abundant amount of research available regarding children and physical activity, as well as examine what other schools have been doing to put more recess back into the school day.

“Why are we taking this away from our children?” asked Laura Cummings, whose son is in the sixth-grade REACH program at Madison No. 1. “To pass a test? To cover more material? You can cover as much material as you want, but it is not going to be learned by a brain doesn’t get the break that it demands, that it needs, to process and retain information.

“You will hear others talking about the studies that say more recess leads to higher test scores and fewer disciplinary referrals, so I won’t quote them here. This is something that has been proven to work—and bringing back recess is a movement among parents and schools across the nation.”

A local example of bringing more recess back into the school day can be found at St. Francis Xavier School in North Central Phoenix. For the next school years, SFX is reinstating a morning outdoor play/recess time for all grades of 20 minutes, as well as adding 5 minutes to afternoon lunch and 5 minutes to afternoon recess.

“As we jammed more and more into the school day, students were displaying less focus and some distraction,” said Kim Kavnar, principal at St Francis Xavier School. “Teachers were reporting that they often needed to spend excess time to help students get ready to learn. Our school day grew impacted with multiple curriculum expectations.

“So we stepped back and reviewed … current research on how students more readily focused and achieved more when given brain breaks,” Kavnar explained.

What they found, Kavnar said, is that brain research, academic success and overall student performance were often more present when students were given free time to play (as opposed to structured play such as organized sports). “Imagination, reflection, and social skills increase when students are placed in open recess. So we saw a correlation to what we wanted for our students,” she said.

The school changed its schedule and shared its rationale with parents, who proved very supportive of the change.

Christine Davis, who organized the Facebook group Madison Parents for Recess, called on the board to restore a second recess period, to distinguish recess from P.E., and if it must be combined with a lunch period, to put recess first rather than last, for “calmer eating and less food waste.”

“These basics are too critical to be left school to school, which has failed our teachers and students,” Davis said.

“We are asking … to have a voice as parents, in what is added and how,” said Cummings. “This cannot be left up to the individual schools. It is too important to be decided on a school-by-school basis. It will not happen without a requirement from the district. All Madison students deserve the same amount of recess, of freedom to play.”

The Madison District Governing Board is scheduled to meet 6 p.m. Tuesday, May 3 in the district office’s boardroom, 5601 N. 16th St.