Jeff Ginster has been a familiar face to many North Central residents for more than two decades. That’s because this friendly and outgoing redhead has been delivering their mail, day in and day out, rain our shine. But that service has now come to and end as Ginster retired from the U.S. Postal Service on July 1. 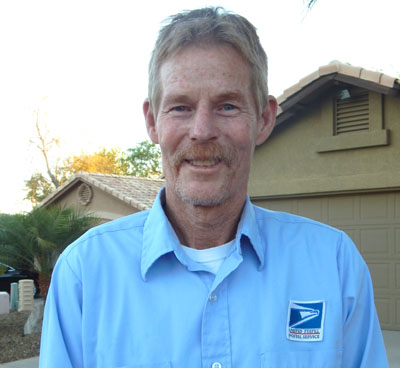 Ginster started his career as a letter carrier in 1973 at the now defunct Deer Valley station, which at the time employed mostly men that had served in the military. So when 18-year-old Ginster walked in with red hair past his shoulders, his reception was less than welcoming.

He caught on quickly though and soon fit in and made a name for himself. Years passed and he worked at McDowell, Northeast and Osborn stations before finding his home at Washington station in 1996, where he stayed until his retirement.

At Washington station, he worked for years across the freeway in the “51” zone before bidding on his North Central route in 2001. His route boundaries were between Central and 7th avenues, and Northern to Gardenia. Chances are, if you live in that area, you have met Ginster at one time or another.

Ginster strived every day to be true to the “service” part of the U.S. Postal Service. He took care of his customers to the best degree possible and formed many personal bonds on his route, listening to many stories and many jokes. He watched babies on his route grow up and go off to college.

He had the respect of his co-workers and management as well, and was the Washington station’s union steward. Many fellow employees sought him out for advice and council—and many still do.