North Central resident Josh Kaplan, 17, last month was named a Hasbro Community Action Hero for his volunteer efforts to create positive change in the community. He is one of 10 youth recognized nationwide by Hasbro Inc., a global play and entertainment company, and generationOn, the youth division of Points of Light. 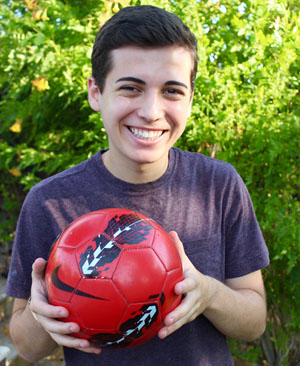 The award recognizes young volunteers whose service achievements have demonstrated the qualities of a hero—kindness, courage and leadership—to serve their communities.

Recognizing that kids with intellectual disabilities are often isolated socially, Josh created GOALS (Giving Opportunities to All who Love Soccer), a nonprofit Unified Soccer Program for youth ages 8-14 with and without special needs to help build a forum for positive social interaction between the groups. The program has impacted more than 200 kids of all abilities, creating inclusive opportunities for all to feel welcome, encouraged and cared about.

“Together with Hasbro, we are encouraging the next generation to build empathy and take action by reaching out in their school or community when they see a problem,” said Delores Morton, executive director of generationOn and president, Programs Division, Points of Light. “The Hasbro Community Action Hero program allows us to recognize and celebrate these young changemakers for the impact they are able to make on society.”

Josh is a senior at Rancho Solano Preparatory School and has been an avid soccer player since he first joined a team at age 7. He has been playing club soccer ever since. He created GOALS after his younger brother’s teammate, who had Down Syndrome, was unable to play on a regular soccer team. His program creates positive peer-to-peer interaction while spreading the value of sports in everyday life.