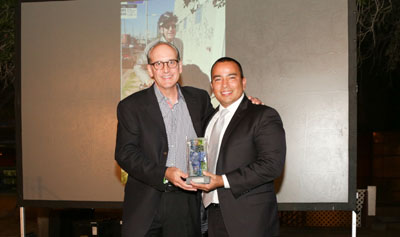 • Language Artist Award: Rashaad Thomas. Thomas is a veteran of the U.S. Air Force. He’s worked with various programs, including ASU’s Project Humanities, the Center for the Study of Race and Democracy, and Performance in the Borderlands. His work incorporates theoretical perspectives of the Black intellectual tradition, the lyrical nature of the jazz tradition, and the rawness of the hip hop tradition, merged into a work that is all his own, while still honoring the voices of the past.

• Music Artist Award: Jerry Lawson. Lawson helped create the genre of acapella, was the original lead singer of the Persuasions, and then spent 40 years preserving the art form. He donates his time and talent to schools and community groups. Today he shares his music and passion with the developmentally disabled. He has developed innovative and compassionate methods and, with no formal academic training, has reached the disabled community in ways that no professionals have.

• Dr. Eugene Grigsby Visual Artist Award: Ann Morton. Morton is a native Phoenician who, after 35-plus years as a graphic designer, shifted focus to pursue an MFA from Arizona State University’s Herberger Institute School of Art. Her work has been shown and recognized nationally and internationally in locations including Los Angeles, Grand Rapids, Detroit, Houston, Australia, Jerusalem, and Rio de Janiero, but her passion is making a difference in her own hometown, Phoenix. One of Morton’s most critically acclaimed pieces is “Ground Cover,” a public art action commissioned by the City of Phoenix Office of Arts and Culture. The project engaged an estimated 600 volunteers, from 22 U.S. states and Canada to make 300 blankets. Each blanket—knitted, crocheted, quilted or woven—formed a 50-foot by 116-foot blanket that covered a vacant lot in downtown Phoenix. The piece was photographed and documented, and each of the 300 blankets was then given to individuals experiencing homelessness.

• Innovative Organization Award: Free Arts for Abused Children of Arizona. For over 20 years, Free Arts of Arizona has worked with dozens of organizations across the Valley, including the Phoenix Art Museum, the Phoenix Symphony, Ballet Arizona, and the Musical Instrument Museum. They use local professional teaching artists to teach children life and art skills. In total, Free Arts enlists 900 corporate and individual volunteers each year. The nonprofit serves over 7,300 homeless, abused, and foster care children each year.

• Lou & Evelyn Grubb Community Innovator Award: Rick Naimark. Naimark started his employment with the City of Phoenix in 1986. He worked his way up to deputy city manager, at times overseeing Arts & Culture, Streets, and the Parks Department. Naimark currently serves on the boards of Friends of Phoenix Public Art, Artlink, and the Jewish Historical Society. He is now at ASU, working on campus planning and development projects, including expanding programs of the Herberger Institute into Downtown Phoenix. In his free time, he’s an artist who started taking painting classes at Phoenix Center for the Arts a few years ago. In addition to working tirelessly for the community, he sells his paintings and gives 100 percent of the proceeds to local nonprofits, including the Hance Park Conservancy.

For more about Phoenix Center for the Arts, visit http://phoenixcenterforthearts.org or call
602-254-3100.