FilmBar is a beer/wine bar in the Roosevelt District that featuring food, craft beers and ciders, wines and a separate, sound-proofed room dedicated to screening new, classic, cult and local independent films in a microcinema setting (76 seats). 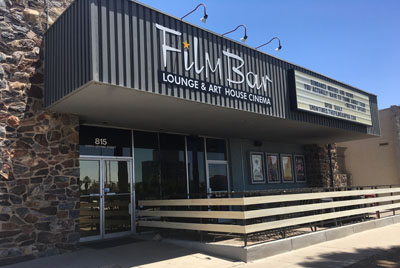 Downtown Phoenix’s Filmbar recently opened a new patio space to increase seating for those who want to enjoy the beer/wine bar aspect of the independent cinema venue (submitted photo).

Since first opening in February 2011, FilmBar, 815 N. 2nd St., has won numerous local awards. And recently, it has added new features to make your visit even more memorable.

FilmBar now has a comfy patio with great views of the downtown street life. A reverse happy hour was introduced in May, available from 10 p.m. to close seven days a week.

FilmBar also has added an additional show time for its Monday through Thursday screenings.

FilmBar screens new indie and foreign films, cult classics, and local films. Additionally, FilmBar periodically presents a themed retro film. Full price tickets for new films are $9; ticket prices vary for retro films. If you want to just hang out at the bar, you don’t have to buy a movie ticket to do so.