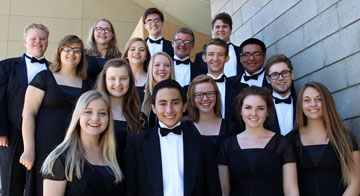 The 17-member Vocal Ensemble from Sunnyslope High School is traveling to New York City this month to perform at the prestigious Carnegie Hall, under the direction of world-renowned conductor Anton Armstrong (submitted photo).

The 17-member Vocal Ensemble from Sunnyslope High School is gearing up for the trip of a lifetime this month, and is seeking the community’s support to help them get there.

The Vocal Ensemble will travel to New York City March 19-23 to participate in a two-day rehearsal with other students from around the country, under the baton of world-renowned conductor Anton Armstrong, culminating in a performance as a National Youth Choir at Carnegie Hall on March 22.

Sunnyslope’s Concert Choir (60 students) and Vocal Ensemble participated in the Heritage Festival in Anaheim, Calif., last year, where both choirs received Gold ratings. That qualified them to go to a “Festival of Gold.” Choir Director Tamara Krause chose the NYC trip because she knew from past experience how life altering it could be for the students.

“This is my third year at Sunnyslope and our previous director, Stephanie Coury, had a tradition of taking a large group to a festival in California one year and taking a smaller, elite group on a bigger trip the alternate year,” Krause explains. “Both of my sons were in her choir program and performed with the Vocal Ensemble in San Francisco, at Carnegie Hall in New York and at a festival in Washington, D.C., during President Obama’s first inauguration.

“As a parent, I saw first hand the life-changing experience this was for the students who participated,” Krause says. “When I came to Sunnyslope, I knew I wanted to continue that tradition.”

Krause chose the Festival at Carnegie Hall because of the opportunity for her students to learn from one of America’s premier conductors as well as “the chance to perform in such an amazing, historic venue.” And a visit to the Big Apple is always a memorable occasion.

But trips like this aren’t cheap, and the Vocal Ensemble members have been raising money since the beginning of the school year by singing at private parties and public events and selling “Butter Braids,” a tasty pastry. But the biggest financial boost can come from tax credit donations, where donors can receive a dollar-for-dollar tax credit of up to $400 for single people and up to $800 for married couples filing jointly on their tax returns.

“Our Vocal Ensemble is made up of 17 great students who have worked hard to learn their music and raise the money for the trip,” Krause says. “There are several who are still working on raising their share. We would absolutely welcome donations and tax credits to help fund the rest of the trip.”

Donations can be dropped off at the Sunnyslope High Bookstore; please indicate “Vocal Ensemble” on the memo line. In addition, the Vocal Ensemble is having its Spring Concert at 7 p.m. Tuesday, March 10, in the SHS auditorium. A table will be set up out front for Butter Braid sales as well as to collect monetary donations.

For more information, contact Tamara Krause at 623-915-8760 or Tamara.Krause@guhsdaz.org.