Madison alumni, past and present Governing Board members, legislators, and supporters kicked off the Madison 125 fundraising campaign with a breakfast on March 5 at the Madison District Office. The campaign to support arts and music education is being held in conjunction with Madison’s 125th anniversary.

Madison 125, sponsored by the Madison Education Foundation, is an effort to raise $125,000 to support fine arts educational opportunities throughout the district’s eight schools. 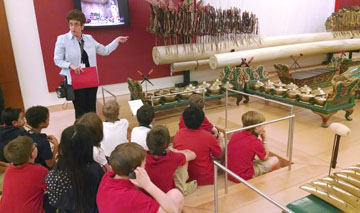 Students from Madison Heights enjoy a tour of the Musical Instrument Museum’s Indonesia exhibit in the Asia Gallery, led by volunteer museum guide Phyllis Soben. The tour was sponsored by the Madison Education Foundation, a nonprofit organization created to expand music, fine arts, and drama within the Madison district (submitted photo).

“Many school districts have already reduced or eliminated music and art programs in order to maintain teacher salaries and ensure basic academic disciplines are taught,” explained campaign chair and former Governing Board President Kendra Tollackson. “While Madison’s leaders have worked to keep arts and music programming a high priority, Madison 125 will undoubtedly help support this vision.”

The Madison Education Foundation was founded as a 501(c)3 nonprofit organization to expand music, fine arts, and drama within the district. Over the last several years the foundation has provided Art Masterpiece, live Phoenix Symphony performances, and world percussion instruments to Madison classrooms. Additionally, it sponsors student field trips to the Musical Instrument Museum and family passes to the Phoenix Art Museum.

Almost 40 people attended the event to show their support for Madison 125. More than $10,000 has been raised to date, with the most notable donation coming from McCarthy Building Companies, Inc. McCarthy’s Executive Vice President of Operations, Justin Kelton, made the announcement, saying, “The Madison School District sets the bar for education. We are proud to support these programs.”

McCarthy has been a longtime supporter of Madison. Not only did the company construct Madison Traditional Academy, it also is the signature sponsor of the Foundation’s annual event, The Madison Bash.

The goal is to raise the remaining $115, 000 by the end of the year. For more information and to donate, visit http://madisoneducationfoundation.org/madison-125/.

The Madison Elementary School District also is compiling an alumni list to keep former Madison students apprised of 125th anniversary happenings. Alumni are encouraged to sign up at www.madisonaz.org/alumni/.