By Teri Carnicelli
More than 80 people, including Phoenix Mayor Greg Stanton, turned out on Oct. 31 for the official opening of a garden dedicated to the memory and spirit of longtime Loma Linda activist Blanche Duggan.

“This is a beautiful and fitting tribute to a beautiful person,” Stanton said at the grand opening of the garden. “I was lucky enough as a new council member to be ‘broken in’ by Blanche. She would politely whisper in my ear suggestions on how I could help her make her neighborhood even better. Great neighborhoods don’t happen by accident; they happen because of dedicated people getting together and making them strong. We would be an even stronger city if we had more people stepping forward like Blanche.” 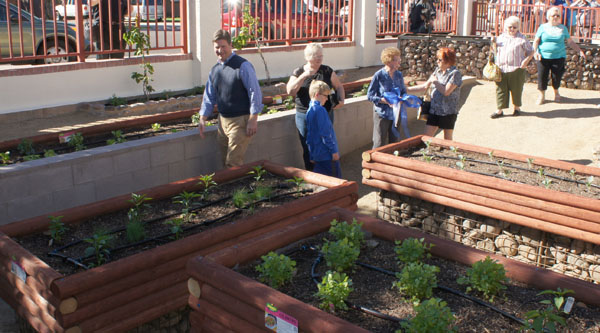 The garden project is a result of the work of the Loma Linda Neighborhood Association and has been a work in progress for the last three years. Duggan was one of the originals founders of the association, where she served as an organizer and neighborhood historian. She also was a volunteer at Loma Linda Elementary, 2002 E. Clarendon Ave., where the memorial garden was installed in a former nondescript water retention area. Duggan worked at the snack bar, supervised children on the playground, and wrote a newsletter.

“Blanche was the rock of our neighborhood,” said Barbara Damiani, treasurer and community liaison for the Loma Linda Neighborhood Association. “There are six of us now trying to do her job, and we can’t keep up.”

Following Duggan’s passing in December 2011, the neighborhood association began working to design a memorial garden in her honor. Spearheading the effort was Mac McDonald, a board member for the association. After looking around the neighborhood for potential sites, the school was approached about using the large open space near its flagpole, adjacent to Clarendon Avenue.

“To have this beautiful garden right outside my office is going to make it hard to get any work done,” said Loma Linda Principal Stephanie De Mar, pointing out the former retention area was “not much to look at.”

Nearly all of the labor was from volunteers, as were much of the supplies for the garden. McDonald said several tons of large river rock first had to be excavated from the site, though nearly half of that was returned into some of the raised garden beds that feature gabion walls created by WW Smith Construction. Valleywide Ponds donated a self-filtering water feature, Sprinkler World donated the drip systems for the garden beds, Stabilizer Solutions donated the granite for the walkways, and all the starter plants came from Bonnie Plants. A new metal archway was designed and fabricated by Doug Klunder of The Lost Ark.

Scott Mitchell, 16, with Scout Troop #6, worked on the garden as part of his Eagle Scout project. He contacted many of the businesses for donations and assistance, and some of his fellow troop members also assisted with labor.

The memorial garden will serve as a tribute Duggan, as well as an opportunity to engage Loma Linda students and teachers in taking an active part in the workings of the garden, all while learning the benefits of gardening and healthy eating.

Approximately 1,350 families living within the Loma Linda neighborhood, which lies within the boundaries of Indian School to Thomas roads, and the SR-51 to 24th Street. Loma Linda residents are invited to use the Blanche Duggan Memorial Garden as a teaching tool for interested neighbors to begin their own home garden, which is fitting as Duggan was an avid gardener herself.