By Teri Carnicelli
The city of Phoenix Historic Preservation Commission has filed an application to preserve the Frank and Sarah Hilgeman House, located at 333 W. Loma Lane, just north of Northern Avenue.

The commission seeks Historic Preservation (HP) overlay zoning for the property, at the specific request of the current property owner, John Spellman, who has lived in the home since the 1970s. Spellman wants to ensure that the home stays just as it is, long after he is gone. 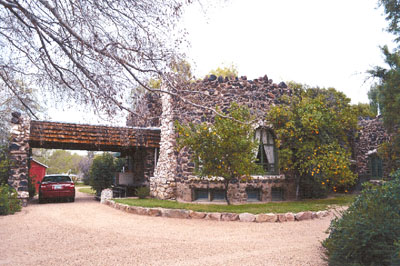 The Frank and Sarah Hilgeman House, also known as the “Rock House” because of its unique construction, could receive a Historic Preservation zoning overlay before the end of the year
(photo courtesy of the city of Phoenix).

The home is often referred to locally as the “Rock House,” because it was constructed using malapai stone and quartz from Sunnyslope Mountain as well as river rock from the Salt River. Oral histories report it took more than three years to complete the home.

The history of the home is an interesting as its appearance. Frank and Sarah Hilgeman moved to Arizona in 1919 after Sarah contracted tuberculosis. The couple and their three children stayed for a time in a tent in the Sunnyslope community, near Dunlap and 7th avenues, until Sarah’s health improved.

Frank, a prominent real estate developer back in their home state of Indiana, had always dreamed of being a citrus farmer. He bought a few acres of land near Butler Drive and 15th Avenue, and the family lived in a small frame house for about two years. Then in 1923 the couple purchased 20 acres located just north of Northern Avenue between 3rd and 7th avenues. The land already contained citrus trees, which Frank kept, except for the area he cleared for his new home.

The Hilgemans suffered some financial losses from the stock market crash of 1929 and continuing into the Great Depression, and lost half of their 20 acres, including the Rock House, sometime in 1940. However, they kept the western half of the property, which already has a house and a barn on it, and census records show they lived at a 7th Avenue address until Frank’s passing in 1944 and Sarah’s death in 1947.

The purpose of HP overlay zoning is to recognize that a property is of historic significance and worthy of preservation. “We didn’t even know it was there until 10 years ago when we stumbled across it while surveying for other potential historic properties,” explains Kevin Weight, Planner III for the city of Phoenix. “It’s significant rock construction is what makes it so unique.” The home also has a basement, another unique feature, particularly in North Central Phoenix.

Properties that receive HP overlay zoning are automatically listed on the Phoenix Historic Property Register. HP overlay zoning does not change uses permitted by existing zoning or require any additional property maintenance; however, it does set limits on alterations to existing properties and may delay their demolition or removal for up to one year.

If approved, it will not pose any restrictions on adjacent properties, just the Hilgeman House.

Comments in favor or opposed to this proposal can be e-mailed to kevin.weight@phoenix.gov, or mailed to: Historic Preservation Office, 200 W. Washington St., 3rd Floor, Phoenix, Ariz., 85003. With either method, reference case No. Z-44-15-3.