Home / Cafe Chat / New eatery walks on the ‘wild’ side

New eatery walks on the ‘wild’ side

By Teri Carnicelli
Carnivores and “foodies” alike have a new reason to dine out in Phoenix, with last fall’s opening of Wild Game Grill.

The niche eatery at 2445 E. Thomas Road offers an intriguing assortment of “game meats” along with traditional restaurant fare such as classic burgers, sandwiches and salads. But for those in a more adventurous frame of mind, there are selections such as the wild boar and pork carnitas; the bison and fontina cheese quesadilla; elk, venison and bison brats; Rocky Mountain oysters; open-faced rabbit sloppy joe; and a melt-in-your-mouth tender wild game steak.

All of the meats are free-range, high-protein and organic. 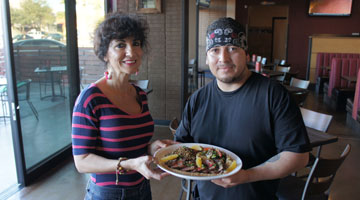 “When you begin to see Costco offering wild game in the meat department, you know people are looking for clean, healthy food options,” says Michelle McGee, partner and co-founder of Wild Game Grill. “But not everyone has time to buy and experiment in the kitchen. That’s where Wild Game Grill comes in. It’s a place for delicious food that’s good for you, and perfect for the healthy-minded and adventurous types.”

Ryan Mirau, a co-owner of the restaurant, grew up in northern Minnesota and spent many years hunting the white tail deer that are prevalent there. “Game meat can be tricky to cook,” Mirau says. “It’s easy to dry out.”

Which is why he and McGee were thrilled when Chef Victor Cabrera came on board. He was originally hired as a kitchen assistant but was quickly promoted to head chef after the owners saw his skill and creativity with game meat.

“He really became the star of the kitchen,” McGee says. “Victor tamed the wild game,” she adds with a laugh.

“I’m the only one in town doing this (wild game) right now,” Cabrera says. “I love it.”

Cabrera works with the owners each Thursday to come up with a special for that day featuring a game meat. Past Thursday specials have included alligator kabobs, ostrich ravioli, kangaroo shepherd’s pie, and Muscovy duck breast. Specials are posted to Facebook and to the blackboard inside the bar area by 3 p.m. each Thursday.

McGee says the wild game meat concept for restaurants is really “hot” right now in southern California, so “Phoenix is a little ahead of the game.”

Wild Game Grill, a member of Local First Arizona, also is making its mark by its location. It’s pushing south of Indian School to extend the growing Central Phoenix dining district. The restaurant is inside a remodeled 1940s strip center, with the entire structure transformed using design elements of original concrete, brick, iron and wood. Interior walls were torn down to create a large open floor plan, keeping a comfortably inviting industrial and authentic feel.

“We’ve retained the original brick, wood rafters and even the concrete flooring, re-stained, of course,” McGee explains. “So we’re respecting the history of the building, and the neighborhood, too.”

And speaking of neighbors, Wild Game has received a warm welcome from the surrounding community, including some apartments just south of the property. Those renters used to complain about homeless people sleeping and urinating in the back parking lot area of the old strip center, of trash and noise and crime. Now, they have a great neighborhood joint just steps from their home that offers a unique menu, a cool bar, and a great patio.

It’s a bright, open space with lots of flat-screen TVs for another kind of “game night.”

Wild Game negotiated an agreement with the office building next door so that the restaurant’s customers can use the office’s parking spaces after 5 p.m. With an already generous parking lot in the back, McGee says between the two lots they can accommodate up to 100 cars.

“Where are you going to find that kind of parking in Central Phoenix?” she points out. “Our customers don’t have to cruise neighborhood streets or deal with valet services just to park here.”