By Teri Carnicelli
Tiffany Allison has a lot on her plate. Not only is she the chef and part owner of the popular Aunt Chilada’s restaurant, she also recently formed her own production company, Tiffany Allison Productions.

Far from being a way out of the restaurant industry, Allison started the production company for one main purpose: to pitch the idea of turning her family business into a reality TV show.

“Aunt Chilada’s: The Next Generation” will be based on passing the ownership of a family-owned business, located at 7330 N. Dreamy Draw Drive, from one generation to the next and all the comedy and drama that goes with it.

“He treats all the staff like family, which is why we’ve had very little turn over.”Allison is one of four daughters of the next generation assuming leadership of the restaurant, which has a colorful history. In the 1800s, Aunt Chilada’s originally gained notoriety as a trading post, bar and brothel servicing Dreamy Draw mercury miners and weary travelers alike. It was the first Arizona business to receive a liquor license. 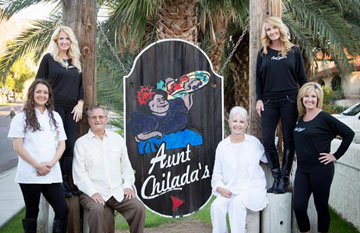 The family behind the popular Aunt Chilada’s restaurant in North Central Phoenix could soon find themselves to be the stars of a network reality television show. Family members include, from left: Tiffany Allison, Jenni O’Brien, Ken Nagel, Candice Nagel, Michele Woods, and Tami Butcher (photo by Briana Ivy).

Over the last 30 years family patriarch, Ken Nagel, built Aunt Chilada’s into a must-see destination with a stellar reputation, both as a restaurant and as an employer.

“My dad is an amazing human being with a great heart and moral compass. He treats all the staff like family, which is why we’ve had very little turn over; some staff members have been with us for literally decades,” Allison says.

But Nagel’s recent health issues prompted the family to decide it was time to pass the reigns down to the four daughters: Allison, and her sisters Jenni O’Brien, Michele Woods and Tami Butcher.

“With four diverse personalities at the helm anything can happen,” Allison points out.

“We all have different ideas about what direction we want to take the business. So there will be some drama for sure, but also a lot of love and humor.”

Allison said with their unique history and strong family core, there had been suggestions over the years about ways to share their story.

“We always thought about writing a book; then reality TV came along,” Allison recalls. She says the original idea was to create an online TV channel and film “webisodes,” which customers, friends, family and fans could watch on their laptops, tablets, cell phones, and other media devices. She pitched her idea to the folks over at Spectrum Video & Film Ltd., who are very familiar with the eatery and its owners—since their company offices are practically next door.

Spectrum felt the timing was right for a reality show that focused on not only a family business but one in the restaurant industry. They gave Allison an estimated budget to produce the webisodes, and the money was eventually raised. Soon filming was scheduled.

Then something unexpected and fortuitous happened. Reality TV host Billy Derian walked into the restaurant.

Derian was actually in town to buy a present for his fiancée, and they decided to go out for some tacos and margaritas. They strolled into Aunt Chilada’s and wound up staying until past 2 a.m., chatting with Allison and the staff about everything under the sun—including the family’s planned Internet television show.

Derian is best known for hosting the Discovery Channel shows “Backyard Brigade” and “Rods N Wheels.” He currently is the host and lead designer on the DIY Network show, “Extra Yardage.” He has been the executive producer/creator of several network and cable shows. But what most people may not know is Derian is a self-taught chef and former restaurant owner himself.

Allison said he got really excited about their concept and offered to help them get it to the next level, since networks are hungry for more reality show ideas and there currently aren’t any focused on a family restaurant business.

“I knew I needed someone like him but I didn’t have the budget. I certainly couldn’t afford anyone of his stature,” but Derian offered to do the job for next to nothing because he really loved the concept, Allison explains.

“You can have these very different characters but can still all love each other.”Derian offered to help with producing a “sizzle reel,” which is a short video that often is used to pitch a television concept by hitting the highlights of what the show will be about. Sizzle reels are then sent out to be reviewed by major cable networks.

The reel was completed last month. Now it’s a waiting game, but Allison hints, “We’re really close to getting picked up by a network. I’m really excited about it, but we can’t say anything yet.”

The rest of the family is on board with turning their Internet TV show idea into a network-hosted reality TV show, despite the fact that it will mean having their personal lives seen by millions, instead of thousands.

“You don’t have to be a perfect family, you can have these very different characters but can still all love each other,” Allison points out. “It would be nice for the public to see you can run a company that way.”

Allison encourages everyone to join the show’s Facebook fan page—Aunt Chilada’s the Next Generation—to follow the show’s progress.