Macias has spent his entire career in the restaurant industry, most recently as the GM of iPic Theaters in Scottsdale. Prior to that, Macias was the GM of Sapporo and the managing partner at Bluewater Grill, where he oversaw the re-branding of this Camelback Corridor landmark formerly known at The Fish Market. 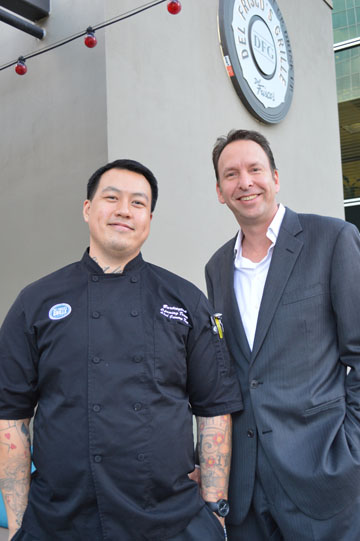 In fact, Macias says part of the appeal of working at Del Frisco’s Grille was returning to the Biltmore area, and working for a company that really cares for its staff and guests.

Which is why Macias’ top priority is, “getting out onto the local community, building partnerships and working with local organizations and charities to make sure Del Frisco’s is doing its part to be valued member of the neighborhood and beyond.”

A Pacific Northwest native, Ton might be a newcomer to local diners, but his resume speaks for itself. After an injury caused him to lose his University of Hawaii football scholarship, Ton turned to his passion for food—learning how to cook traditional Vietnamese food at his mother’s knee—and wrote to celebrity chef, Thomas Keller, to beg for an unpaid internship at Bouchon Bistro.

More recently, Ton has worked at a variety of recognizable restaurants, ranging from the posh Napa Rose at Disneyland and Skycity at the Seattle Space Needle, to the Del Frisco’s Grille in Santa Monica, Calif.