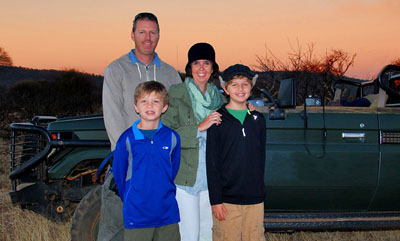 Enjoying a spectacular sunset at the Madikwe Game Reserve in South Africa are the globe-trotting Simmons family, clockwise from top left: dad Jeremy, mom Carrie, and sons Nathan and Seamus (photo courtesy of Travel With Kids).

Three years ago, Seamus traveled with his parents and younger brother to a school in the township of Soweto, South Africa, and saw firsthand the lack of basic supplies for the school children. It made such an impression on him, that when he returned home he started fundraising to buy supplies and send them to the school.

Seamus created the RePack Project to continue to collect and donate used school supplies to benefit the school in South Africa. He has collected more than 10,000 school supplies and personally delivered them to the school.

Seamus was first named a local winner and received a $50 Kohl’s Gift Card. As a Regional Winner, he also received a $1,000 scholarship for higher education.

Since the program began in 2001, Kohl’s has recognized more than 24,000 youth, including the 2015 winners, with nearly $4.7 million in scholarships and prizes. The Kohl’s Cares Scholarship Program is part of Kohl’s Cares, Kohl’s philanthropic program focused on improving the lives of children. For more information about Kohl’s community involvement, visit www.kohls.com/cares.