Home / Community / O’Connor visits exhibit on her life and legacy

O’Connor visits exhibit on her life and legacy

By Caroline Woodiel
As one of modern-day America’s most influential women, Sandra Day O’Connor’s life has been filled with an incredible collection of stories and accomplishments. It is no surprise those accomplishments have been woven together into a single traveling exhibit organized by the National Cowgirl Museum and Hall of Fame of Ft. Worth, Texas. 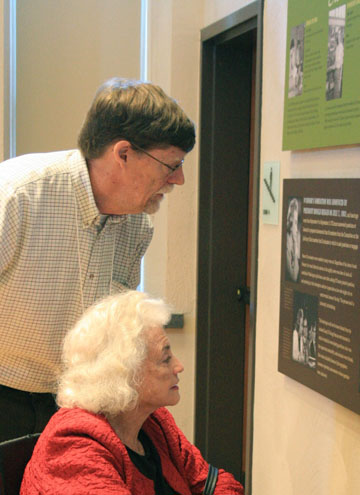 Associate Justice of the Supreme Court of the United States (Ret.) Sandra Day O’Connor tours the exhibit, “The Cowgirl Who Became a Justice: Sandra Day O’Connor,” led by Head Librarian Chas Moore in the McClelland Library at the Irish Cultural Center (photo by Patricia Sahertian).

“The Cowgirl Who Became a Justice: Sandra Day O’Connor,” reflects on O’Connor’s childhood on an Arizona ranch and the experiences that ultimately influenced her nomination and appointment as the first female Supreme Court Justice of the United States.

This exhibition is not the typical retrospective. Drawing largely from the book co-authored by O’Connor and her brother, H. Alan Day, “Lazy B: Growing Up on a Cattle Ranch in the American Southwest,” the exhibition expands upon moments from her life. Issues of practicality connect both ranch life and bench life, plus other distinctive issues faced either on the ranch in Arizona or during confirmation in Washington, are explored.

The exhibit is filled with scenes from various eras in O’Connor’s life: images of a young Sandra Day atop her favorite horse, Chico, on the Lazy B. Ranch; a law student at Stanford University; and the newly appointed Justice on the cover of Time magazine.

O’Connor took her first tour of the exhibit after speaking at a women’s empowerment luncheon sponsored by the YWCA of Arizona at the Irish Cultural Center on Jan. 13. Chas Moore, head librarian of the McClelland Library—where the exhibit currently is housed—and retired Arizona Supreme Court Chief Justice Ruth McGregor accompanied O’Connor as she made her way through the exhibit.

“Justice O’Connor provided some fascinating anecdotes on her life prompted by the imagery of the exhibit,” remarked Moore. “The windmills which provided water for the lifeblood of the ranch were a favorite memory and she recalled the soothing clacking sound they would make at night.”

As some of the most well known members of the Irish-American community, the O’Connor family has left an indelible imprint on this country as well as in Arizona.

“The Cowgirl Who Became a Justice: Sandra Day O’Connor” is on display through May 23 for public viewing at the McClelland Library, located at the Irish Cultural Center, 1106 N. Central Ave. Further information about the exhibit can be found at www.azirishlibrary.org or by calling 602-864-2351.