By Teri Carnicelli
When Chris and Katinka Bryson saw the home at 7110 N. Central Ave. was for sale, they couldn’t resist the lure of both a good investment—and the chance to live on a property rich in both history and beauty.

The home, originally built in 1951 and added onto significantly over the years, was the childhood residence of Cindy McCain, whose father, Jim Hensley, founded Hensley & Company in 1955. This liquor distribution enterprise has become one of the largest companies in Arizona by selling brands of Anheuser-Busch beer. 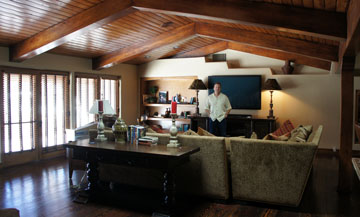 Sen. John McCain and wife Cindy raised their family in the home and decided to downsize in 2006, selling the nearly 3-acre estate for $3.2 million—at that time, the highest price ever paid for a home in the North Central area.

The new owners were Las Vegas investors and sunk nearly $1 million into the home to make it more “resort-like,” and add a little Vegas glitz and glamour. When Sen. McCain ran for president in 2008, the investors hoped to cash in on his public image and profile—they were betting on making big bucks if he won the U.S. presidency. After turning down a $6.5 million offer, the results of the election came in and the offers on the home evaporated. A foreclosure notice from the bank soon followed.

In the meantime, the investors let the home out to renters, who did some damage. The home was eventually sold in November 2011 to the Brysons in a short sale for $1.8 million, but a lot of work had to been done, including replacing the high-end custom kitchen appliances that had been removed by the former owners. In addition, the grounds and the pool were in great disrepair.

The Brysons spent nearly $400,000 to bring the home back to its original beauty, fixing the damage, repairing the roof, repainting the exterior, and even upgrading the security system. But a 13-bedroom home with acres of property is a lot to maintain.

The Brysons decided in 2014 to put the renovated home back on the market. It currently is listed for $2.5 million.

The real estate agent is the same one who sold it for the McCains and the Las Vegas investors—Bobby Lieb of HomeSmart Elite Group.

“This is a one-of-a-kind North Central estate with a lot of history and heritage,” pointed out Lieb when the home was for sale in 2011. “It would be a shame for some out-of-town investor to tear this home down and build a frame and stucco home with tile roof, considering the charm and style that this home has.”

Lieb says the biggest challenges in selling this home are its uniqueness, and its size. “You don’t see a lot of 14,000-square-foot homes in this area,” Lieb explains. And while the “historic” nature of the home and its many original features would appeal to many, the very scale of the home could be daunting.

He adds that longtime residents in the North Central community generally don’t like it when an older home gets torn down on a large lot, and three homes are put up in its place. But often that is what the underlying zoning allows for by right, and also, the seller wants to get the best profit he can, and the buyer wants to maximize his investment if he isn’t planning on actually occupying the home. It’s a reality of today’s real estate market.

Both the sellers and Lieb are hopeful that the “right” buyer will come along who will appreciate the home as it is now, with all its charm and history.