Hillary Frank grew up on a small urban farm in North Central Phoenix, where she learned to care for a variety of animals—horses, sheep, goats, a cow, ducks, turkeys, chickens, rabbits, tortoises, and the standard dogs and cats. She later volunteered at a local veterinary office. So it’s no real surprise that her career path ultimately would lead her to the care of animals, great and small. 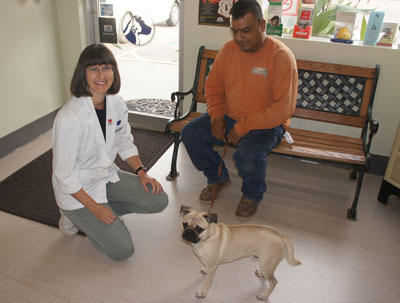 Dr. Hillary Frank, owner of North Central Animal Hospital, visits with Rafael Aboite and his 1½ -year-old pug mix, Chester, who was in for his booster shots (photo by Teri Carnicelli).

After graduating from Colorado State University in 1992 with a postgraduate degree of Doctor of Veterinary Medicine, she returned to Arizona, and in 1995 she opened North Central Animal Hospital, located at 20 W. Dunlap Ave. This year marks the veterinary office’s 20th anniversary.

“At that time, there were only a few specialists in the whole state, and most hospitals were owned by the doctor that worked there,” Frank recalls. “Now, the family-owned practice is a rare find, and most of the neighborhood practices have been sold to large conglomerate national corporations who don’t always publicize the sale.”

Frank has made it a goal of the practice to keep up with the variety of pet “trends” that have come (and gone) over the years. “There are many more types of exotic creatures such as sugar gliders, geckos, ball pythons, as well as the more familiar rabbit and guinea pigs to care for in addition to the family dog and cat,” she points out. In fact, Frank obtained specialty certification in bird medicine and surgery in 2004. “Today’s veterinarian needs to have a lifelong commitment to learning and advancing skills through their career,” she says.

Frank not only continues to learn, but also shares her knowledge with others. An adjunct professor at Midwestern University, she is part of the One Health Initiative to collaborate with physicians and other health professionals.

“Veterinarians have always played a huge part in reducing diseases that can transfer to humans, and we all know pets are an integral part of improving human health and quality of life.”