By Patty Talahongva
Several students from local high schools were a part of history this summer when they were selected to attend the first-ever White House Tribal Youth Gathering (WHTYG) on July 9 in Washington, D.C.

Mia Tenijieth, 16, from Central High School, explains that in order to qualify the students had to take the Gen I challenge, which is a pledge to do something positive for your tribal community. Tenijieth is White Mountain Apache. Her pledge involved recording cultural stories from Apache elders to pass on to future generations of Apache youth so the culture remains. 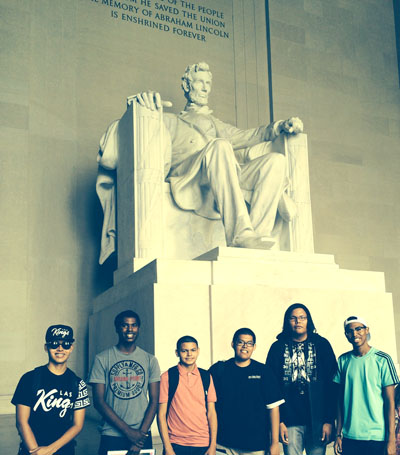 More than 1,000 youth from 230 tribes and 42 states attended the WHTYG. This historic meeting came after President Barack Obama and the first lady visited the Standing Rock Sioux reservation last summer. There they met privately with six youth and were shocked to hear about the challenges Native youth face every day such as high rates of suicide, behavioral health and housing issues.

The president directed his cabinet members to hold listening sessions on tribal reservations to discuss economic opportunity, education, cultural and other issues. Last December he announced the formation of Gen I and the summit. “We want to give young Native Americans like them the support they deserve. We have to invest in them, and believe in them, and love them,” said the president. “And if we do, there’s no question of the great things they can achieve, not just for their own families, but for their nation and for the United States.”

The gathering was aimed at youth 24 years and younger. And while the president himself didn’t attend, he did send the first lady who was greeted with thunderous applause and a standing ovation.

“I thought what she had to say was really inspiring,” says Tenijieth, who pointed to the name of the Washington professional football team which is defined as a racial slur but is still used. “I felt like she was motivating us to do something. We can change what we don’t like,” she point out. “We can do something about it.”

The day before the summit, a federal judge ordered the cancellation of the team’s trademark name, saying it may disparage Native Americans.

“We are strong, even if we are at our weakest point, if we feel like nobody is listening, we can try,” Tenijieth said. “If we stand up people will stand up with us eventually.”

For Klain Benally, 18, who just graduated from North High School, the event reinforced his belief that more Native American history needs to be taught in public schools. During one of the breakout sessions, “I spoke about how to improve higher education for Native American students. I mainly talked about Native languages. Universities hardly teach other (Native) languages like Apache.” He’d like to see more native languages taught at universities.

Benally will attend Arizona State University in the fall where he’ll major in American Indian Studies and he’s thinking about a career as a history teacher.

Besides Michelle Obama, the youth also heard from several of the president’s cabinet secretaries, including Julian Castro from HUD, Sally Jewell from the Interior Department, and U.S. Attorney General Loretta Lynch. Dr. John Herrington, the first tribally enrolled astronaut, also addressed and encouraged the youth to stay focused to achieve their dreams. “Seeing Michelle Obama was phenomenal because you could feel her passion and strength in her speech,” said Hank Hibbeler, 17, who attends Sunnyslope High School. He was also touched by the first lady’s recognition of the genocide inflicted on Native Americans. “After she acknowledged this, she said that we have the ability to make life better for us,” he recalled.

Hibbeler is in the process of applying to 10 universities and following the WHTYG he flew to California to visit Stanford University.

For Camelback High School incoming senior, Deandre Maxwell, 17, being around the power brokers influenced him. “It made me want to go into politics and make a change,” he said. “I want to make a difference for native youth.”

Benally, Hibbeler and Maxwell attended WHTYG as part of the Forward Promise College and Career Readiness Program sponsored by the Phoenix Indian Center.

Other Valley teens who attended this once-in-a-lifetime event included Melinda Morales from Camelback High School; LaVonte Ellis from Trevor Brown High School; Warren Johnson from Skyline High School; Michael Rocha III from Cesar Chavez High School; and Josiah Lester from Gilbert High School. The Native youth were encouraged to Tweet about the experience and on that day, and the hashtags #GenI and #WHTYG trended nationwide.