By Kourtney Seaton
For 15-year-old Lalae Mozie (she prefers to be called by her pen name), writing is as easy as closing her eyes and letting the stories flow.

Her first book, “Merely Alive,” was published when she was 12, after taking two years to write, while her second book, “Always Will,” took about a year and was published in late 2014. “It gets a lot easier after you start,” Mozie explains. 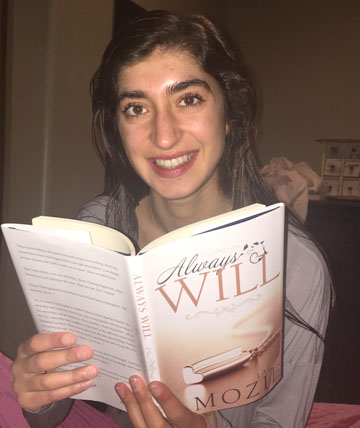 She says that inspiration for the second book came to her in a dream.

“I had this dream one night and I really wanted it to come true so I decided the only way I could actually relive it was to write it down and get everything out,” Mozie says.

In the book, “Always Will,” Kennedy Shaver is a 30-year-old nanny who cares for five children. She leaves them to write a book and discovers that she can control her own life and destiny, Mozie explained. The main character, Kennedy, went through life only thinking about her past and never thought she could own her life.

“She figures out life is what you make it and it’s OK to be who you are,” Mozie says.

Mozie lives in North Central Phoenix and is a freshman at Phoenix Country Day School in Paradise Valley. Among her favorite subjects to study include English, history and biology.

Her friends love to read her books and are supportive during her journey as a published author. When she is not writing, her hobbies include speech and debate, theater, piano and playing basketball.

“I love writing humorous pieces because I like to make people laugh, but then recently I wrote a story where it was really funny but then it was a really sad ending,” Mozie recalls. “So I like to flip a switch pretty quickly and abruptly.”

Mozie finds her writing abilities to be most creative when close to nature, sitting outside alone.

“I think that there are so many opportunities to do what you want, and if there aren’t, you can create them,” Mozie says. “It’s all about making yourself fulfilled in life and taking chances.”

She advises anyone who wants to begin his or her own book to just start writing and not worry about plans for the story or think you can’t do it. “Just let the words pour onto a page and you can go back and fix it up—the main thing is just starting.”

Mozie wants to keep writing and is interested in working on short stories next. Her books are available through AuthorHouse Publishing and costs $14.95 for “Always Will,” and $13.95 for “Merely Alive.”

Editor’s note: Kourtney Seaton is a journalism student at the ASU Walter Cronkite School of Journalism and Mass Communication.