By Jade Frazier
North Central resident Dennita Sewell, curator of fashion design at the Phoenix Art Museum, recently gave an inside look on the international fashion design exhibit, “The White Shirt According to Me. Gianfranco Ferré,” which will make its first U.S. debut at the museum on Nov. 4. 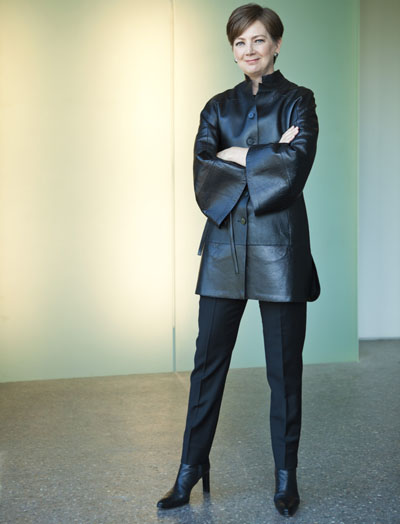 North Central resident Dennita Sewell is particularly excited about Nov. 4, because that is the day her recent hard work as curator of fashion design at the Phoenix Art Museum comes to fruition with the opening of “The White Shirt According to Me. Gianfranco Ferré,” which is making its U.S. debut in Phoenix (submitted photo).

The exhibit will display the creative process of fashion design that was influenced by one of the most sophisticated 20th and 21st Century Italian fashion designers. Arizona residents can look forward to 27 of Ferré’s most significant white shirts dated from 1982 to 2006.

In addition to the physical garments, sketches, technical designs, photograph and videos from the archives, the Gianfranco Ferré Foundation invite attendees to observe his precise methods and fashion design techniques.

Sewell, who was hired as a fashion curator for the Phoenix Art Museum in January of 2000, said, “I really enjoyed working with this collection and am excited to share these pieces with the community.”

In the almost 16 years she has worked at the museum, Sewell has mounted about 39 shows and in April it will be her 49th show.

Sewell moved to Phoenix from New York City; however, she is originally from a small town in Missouri. The love of fashion ignited in Sewell as her mother, who was a seamstress, inspired her.

“Since before I could read I was interested in fashion and she engaged me in the process of making clothes—my own clothes and clothes from my Barbie,” Sewell recalled.

Sewell’s love for fashion and design turned into a life-long hobby, even while growing up as the youngest child with two older brothers. And now, with the Ferré exhibit, Sewell gets to achieve a personal milestone even as the museum celebrates its own.

“As one of the leading art museums in the country with a rich heritage of fashion design, we are thrilled to bring this extraordinary international exhibition to the United States,” Sewell said. “It’s an exceptional way to launch an outstanding year of programming to celebrate the 50th anniversary of our own collection.”

“The White Shirt According to Me. Gianfranco Ferré,” will be on display in the Steele Gallery at the Phoenix Art Museum through March 6, 2016. A companion piece, “Gianfranco Ferré Designs,” will be housed the Ellman Fashion Design Gallery. As part of the museum’s “Object of the Month” series, a docent-led tour of the Gianfranco Ferré exhibits will take place at 11:30 a.m. on Saturday, Dec. 5, which is included with regular museum admission.

Editor’s note: Jade Frazier is a student at the ASU Walter Cronkite School of Journalism and Mass Communication