Home / Community / Gallery itself is worth the visit

Gallery itself is worth the visit

By Tayler Williams
North Central resident Lisa Sette moved her well-established art gallery from Marshall Way in Scottsdale to Midtown Phoenix almost a year ago when she found an Al Beadle building was available, located at 210 E. Catalina Drive.

Beadle, an architect whose Phoenix work spans several decades beginning in the 1950s, is best known for his stylish mid-century residential buildings and for his influence on desert modernism. 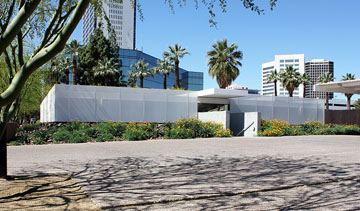 Lisa Sette, who operated an art gallery on Marshall Way in Scottsdale for more than 30 years, couldn’t resist when the opportunity to move her gallery into an Al Beadle-designed building in Central Phoenix came up. The 1970s-eras structure is partially underground and sports a sun-protective fabric scrim (photo courtesy of Lisa Sette Gallery).

“A big part of it [moving] was a chance to renovate it and have the gallery in the building,” Sette said. “It’s larger, it’s got more light in all the offices … we were able to customize the space to our specific needs. It’s a delightful little Modernist building, and it’s semi-subterranean.”

Meaning it is built partially underground—a design choice Beadle made in the ’70s while considering the harsh desert climate. “It has a white fabric scrim around the outside of the structure, which makes it look like it’s glowing at night,” Sette added.

If the building wasn’t incentive enough to move, it turns out Sette’s husband, Peter Shikany, owns the graphic design studio across the lot—in a twin building also designed by Beadle. This is especially convenient for Sette, since Shikany’s PS Studios is, not surprisingly, the design firm she uses.

Sette worked with StarkJames to preserve the original structure, but added the sun-protective fabric scrim. She also added a number of palo brea trees in the parking area so the two buildings have the same look and feel from the outside.

The Lisa Sette Gallery will host exhibitions from a Cuban artist, Reynier Leyva Novo, and an Indian artist, Siri Devi Khandavilli, in the months of April and May. Both artists will be showcased in the gallery for the two-month span, since it’s a two-person show. The exhibition will consist of mostly sculptures. It begins April 4 with a reception for the two artists from 2 to 5 p.m., and ends May 30.

Khandavilli’s sculptures are made of bronze, a medium she uses to portray the female goddesses of the vast Hindu pantheon. Novo is showcasing his works in his first solo exhibition in the United States. His works are more about embodying heroism, and using objects to encompass an event/person in history. His exhibit will showcase pieces that revolve around U.S.-Cuban relations.

Editor’s note: Tayler Williams is a journalism student at the ASU Walter Cronkite School of Journalism and Mass Communication.