By Teri Carnicelli
The Madison Elementary School District is a tight-knit community of families, teachers and administrators who are dedicated toward the betterment of their children. So it was a great shock to this community when one of their own, a young boy, was tragically murdered by his father on Dec. 31, 2013. 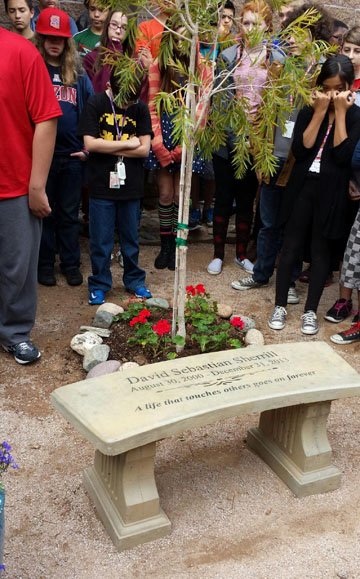 Former classmates and friends of Madison No. 1 student David Sebastian Sherrill, who was killed on Dec. 31, 2013, gather around a memorial garden installed in his honor outside the school library. The garden was dedicated on Dec. 17, 2014 (photo courtesy of the Madison School District).

David Sebastian Sherrill, 13, known to his friends as Sebastian, was a caring young man who always had a smile on his face, recalls his Madison No. 1 Special Education teacher, Joella “Jo” Bever. She and other teachers, as well as Sebastian’s friends and schoolmates, attended an impromptu candlelight vigil at the boy’s North Central Phoenix apartment just days after his death.

Still, it’s hard to find closure after such a shocking and violent act on an innocent child. Bever and her Special Education co-teacher at Madison No. 1, Gretchen Olson, began to come up with a plan for a permanent memorial for the boy on the school campus, something that would lessen the sadness when it was looked upon and raise the spirit.

That idea eventually bloomed into a garden.

The two teachers went to Summer Winds Nursery at 1515 E. Bethany Home Road to look at ideas for potted flowers and trees. “As we were asking questions, the garden assistant asked us what it was for,” recalls Bever. “We told them about the memorial and they said we should talk to Cheri (Morgensen).”

Morgensen is the garden coach at Summer Winds. After hearing their story, Morgensen approached the nursery managers about donating the supplies. “They were touched by David’s story and more than willing to help,” Bever says. “It is so heartwarming to see that people can be so generous for a small boy they did not even know.”

Morgensen even personally visited the site, located adjacent to the school library, to determine what flowers and trees would work best.

Summer Winds ultimately donated more than $400 in pots, various kinds of flowers, and a beautiful tree. In addition, The Madison No. 1 Parent Teacher Organization (PTO) purchased a memorial stone bench from Memories To Stone to be placed in the small garden. The bench reads, “A life that touches others goes on forever.”

The memorial garden’s dedication was held on Dec. 17, 2014. Sebastian’s mother, stepfather, stepsister and stepbrother attended, along with many of his former classmates, teachers, and friends. There was sadness, but also a sense of love and, perhaps finally, closure.