By Alexis Ramanjulu
In September, Thunderbird High School named its football field after former teacher and coach, Jack Storey. Storey’s tenure was decades ago, however, his impact was significant enough to have his name memorialized.

Storey joined the Thunderbird faculty in 1973 and taught freshmen science. In addition to helping the high school rookies in the classroom, he coached the freshman football team. 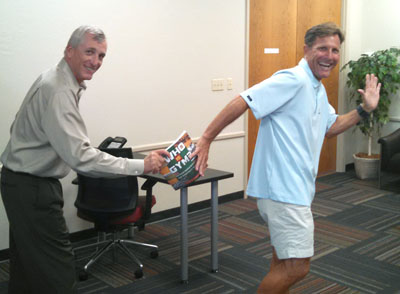 Rather than a baton, Scott Hanson hands off his new book—“Who is Gym?”—to Tom Flood, who begins his sixth season as Grand Canyon University’s head men’s and women’s track and field coach in 2016 (photo courtesy of HMA Public Relations).

“He preferred to teach the younger students because he felt they needed the most support in adapting to the increased rigor and pace of high school,” said Thunderbird Principal Jeannie Paperella.

“In Texas, they name stadiums for the winningest coach or the most generous benefactor. It is a testament to this community that [Jack Storey Field] carries the name of a treasured teacher,” said Thunderbird High social studies teacher, Jonathan Parker.

Fields, stadiums and gymnasiums all over Arizona are named after people who have impacted their respective communities. However, while the names might be known by some, the faces they belong to often are not.

Scott Hanson, an Arizona native and 30-year high school football and baseball official, took it upon himself to research the mysteries behind the names of these high school sports venues.

“The idea for the book started three years ago on a Friday night at Cactus High School as my football crew was preparing to officiate the school’s varsity football game,” Hanson recalls. “The field was named M.L. Huber Stadium. Not familiar with Huber, I asked a couple people at the school who he was. To my surprise, they didn’t know who Huber was either.

“Then a week later, our football crew was at Independence High School and I asked about the story behind their Tolmachoff Stadium. I got the same answer. It was then that I was motivated to action,” he explains.

“Who is Gym?” is a collection of brief summaries about who these venues are named after, and why. The book is separated into five sections, dividing up the types of venues and the different schools across the state—including many in the North Central community.

Brophy College Preparatory was named after William. H. Brophy by his wife, Ellen Amelia Goodbody Brophy, after his death, according to Hanson’s book.

Hanson’s alma mater, Washington High School, named its football field after not only an influential teacher and coach, but his family as well. Tom Pagel’s sons were student athletes at WHS and the family has been actively involved with the Rams community for more than 50 years.

A former basketball coach at Sunnyslope High School, Dan Mannix, has his name displayed on the school’s gymnasium. Mannix brought the school two state championships and was named The Arizona Republic Big Schools Coach of the Year in 2002, according to “Who’s Gym?”

While it appears that only males have their name on sports venues, looks can be deceiving.

Arizona’s unique approach when naming sporting venues is admired because it recognizes teachers who help better their students and the school.

“Who is Gym?” is available for purchase for $19.95, plus shipping and handling. To purchase a copy, visit http://whoisgym.com.

Editor’s note: Alexis Ramanjulu is a student at the ASU Walter Cronkite School of Journalism and Mass Communication.