Editor’s note: see UPDATE at the bottom of this story.

Two longtime Valley businesses are using a crowdfunding website to bring in much-needed revenues that will help guide their respective futures. And they have a lot on the line, because with Kickstarter, you either make your goal 100 percent, or you get nothing.

Mary Coyle Ol’ Fashioned Ice Cream, which shuttered its doors last year, had been a staple for North Central families since 1951, when the Coyle family moved to Phoenix from Akron, Ohio. Serving its signature homemade ice cream, as well as lunch and dinner selections, the building and business changed hands in 2011 when Phoenix resident and loyal customer Mike Stoffey bought it, with the hope of reviving the sagging business. 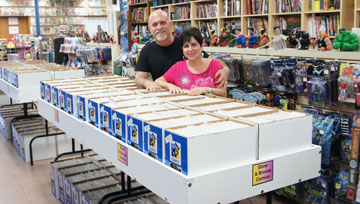 Alan and Marsha Giroux, owners of All About Books and Comics, have lost their lease and are seeking the community’s help to raise funds to move their massive inventory to their new space just around the corner (photo by Teri Carnicelli).

However, after refreshing both the décor and the food menu, business still continued to lag behind increasing costs, and Stoffey was forced to close in September 2014.

But the ice cream shop’s following continues to remain strong and the Mary Coyle Facebook page is filled with fond memories, nostalgia, and a staunch hope that the popular ice cream will one day return.

A recent post to the Facebook page announced the launch of the Kickstarter campaign, with the goal of raising $45,000 to make Mary Coyle ice cream a mobile product.

Stoffey envisions the new Mary Coyle as a good ol’ fashion ice cream truck, serving real ice cream scoops all over Phoenix. But first he needs the community’s help to purchase a used truck, outfit it with some freezers and other gear needed to scoop the ice cream, dress it up in the Mary Coyle colors, and put it on the road.

“I’m putting up the location to make the ice cream myself,” Stoffey explained.

Once the project is funded, Stoffey expects to have the truck on the road 90 days after that.

“We’ll be competing with everyone else on the road serving dessert, but we think our product is unique and that people love it, so we’ll be able to handle the competition,” Stoffey said.

The Kickstarter campaign will run through March 28. For a $5 pledge you get a free scoop of ice cream, and there are various levels of donation up to $10,000, which can get your name on the truck as a sponsor (only 3 available). For more information, visit http://kck.st/1KNLUrY.

Another longtime Valley business also will be closing its doors shortly, but only to move to a new site around the corner. The move comes not by choice but by necessity, as All About Books and Comics lost its lease and has to find a more affordable space for its hundreds of thousands of comics, collectibles and more.

All About Books and Comics, 5060 N. Central Ave., has been in business in uptown Phoenix since 1973 and has a rich history as the oldest comic book store in the Valley, with more than 4,000 square feet devoted to comics from 1940 to the present.

Now the owners are renovating not one but two adjacent spaces in the small strip center less than a quarter mile away, at 24 W. Camelback Road.

“It had to be close because we wanted to keep our existing customer base,” explained Alan Giroux, who owns the shop with his wife, Marsha.

“Moving literally 1 million comics and completing construction on a brand new store location will be an extremely costly endeavor, so we’re turning to our community, our friends, our family, and our phenomenal customers to help us with this unexpected, costly venture,” Giroux explained.

They have to be out by July but hope they will be moved and open by June.

The couple launched a Kickstarter campaign to crowd-fund a portion of their moving expenses, to the tune of $33,000. As of the end of February, they are already two-thirds of the way there. Donors will receive exclusive perks, rewards, recognition, and merchandise to help move the shop. The campaign runs through March 11.

UPDATE:
Unfortunately Mary Coyle’s did not reach its fundraising goal, however, owner Mike Stoffey says he is continuing to look for a brick-and-mortar site where the ice cream can be produced.