By Tristan Ettleman
The Refuge, a cafe and social enterprise of Catholic Charities, has worked with refugees and at­-risk youth as part of its youth development program for nearly a year, and general manager John Strawn says it’s been mostly successful.

Strawn notes that the program, which has seen 16 participants since it began in December 2014, has had an 83 percent success rate. That success is measured against the goal of the vocational training, which is to obtain and maintain a job, Strawn points out. 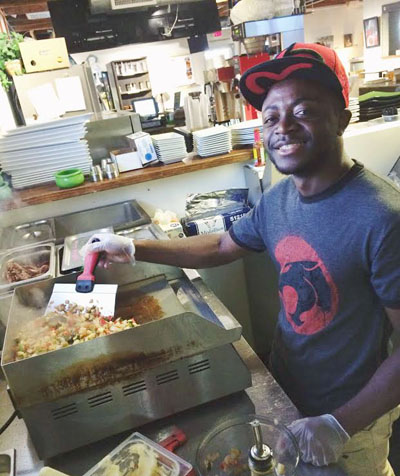 Rodrigue Wasanj, a 20­year­old refugee from the Democratic Republic of Congo who immigrated to Arizona in 2011, works as a cook at The Refuge Café, a social enterprise of Catholic Charities (photo courtesy of The Refuge).

Danielle Heyer, director of the Youth Development Program, explains the goal of finding a stable job is worked toward by developing cashiering, barista, baking, cooking, food handling, serving, budgeting, and interviewing skills. “Yes, we want to teach them job training skills, but we also want to make sure that they’re stable,” Heyer says.

Rodrigue Wasanj, a 20­-year-­old refugee from the Democratic Republic of Congo, was one of the first to be trained as part of the program, and has found further passion for cooking through it.

Wasanj explains he started as a dishwasher, and his interest in cooking led him to be hired on as full­-time cook at The Refuge upon completing the program. He says he started cooking when he was 18 as a means of helping out his sister and brothers, who he lives with in Phoenix.

The culture in the Congo, Wasanj notes, is different than America when it comes to spending money. The influence of European colonization, he explains, means people seem to focus on fashion and spending on clothes, and learning how to budget his money through the cafe’s program was difficult.

“I’m just so proud of people teaching me and proud of myself,” Wasanj says of the program.
Tial Fam, 20, is a refugee from Myanmar, and is one of the newest participants in The Refuge’s vocational training program. Within three weeks of participating, Fam says she had learned how to make coffee, bake, and work a register.

Fam states that she is from Burma (rather than the current official name of Myanmar), which indicates the “government stuff” that led to her leaving the country. She says the economy there was suffering, making it hard to find a job, and there weren’t many freedoms afforded by the government.

“I just wanted to study and, you know, get a job,” Fam says, laughing, when explaining her reasons for coming to America and Arizona five years ago. Right now, she attends Grand Canyon University, and says she wants to work in accounting and business.

The Refuge opened nearly two years ago as a means of providing income to fund Catholic Charities programs, Strawn says, but the vocational training is distinctly a part of the cafe itself. As such, the program has received funding from Starbucks, the Executive Council Charities, and the Bank of San Francisco.

The Refuge is located at 4727 N. 7th Ave. For more information, visit www.therefugeaz.com.

Editor’s note: Tristan Ettleman is a student at the Walter Cronkite School of Journalism and Mass Communication.