There is still a great deal of uncertainty about the Affordable Care Act and what it means, especially among the country’s senior population. It’s a scenario that scam artists relish, and they are already using confusion about healthcare changes for their financial gain. 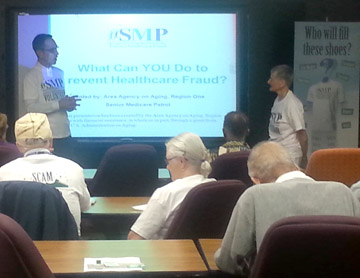 Scammers prey on Medicare beneficiaries in particular. Not only is it unethical, but the annual cost of health care fraud in the United States is in the billions, according to Patricia Gonzalez-Emblem, SMP director for the Arizona Department of Economic Security’s Division of Aging and Adult Services.

Arizona is ramping up its efforts to help Medicare beneficiaries proactively protect themselves against fraudulent, wasteful and unethical healthcare practices by offering its statewide Senior Medicare Patrol (SMP) project. This project is part of a nationwide Administration on Aging initiative that educates and counsels beneficiaries to be alert and aware of scam activity.

SMP volunteers conduct outreach through group presentations at senior centers, senior housing complexes, churches, and more. Organizations and facilities that serve a population of Medicare beneficiaries can take advantage of the program by scheduling a free SMP presentation.

“Face-to-face interaction is the most effective way to reach seniors with this information, which is why we need volunteers in communities throughout Arizona,” said Gonzalez-Emblem.