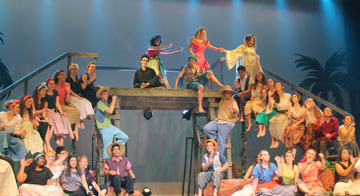 The Xavier-Brophy Theatre received several awards and award nominations for last year’s production of “Once On This Island,” including awards for Outstanding Production and Outstanding Ensemble
(submitted photo).

The Xavier-Brophy Theatre is not resting on its laurels after an award-winning last season. The combined drama departments of Xavier College Prep and Brophy College Prep present Disney’s “High School Musical,” 7 p.m. Oct. 15, 16 & 18, with a matinee performance at 2 p.m. on Saturday, Oct. 19.

All performances will be held in the Kemper and Ethel Marley Theater in the Virginia G. Piper Performing Arts Center on Xavier’s campus, 4701 N. 5th St. Tickets are $7 for all patrons and may be reserved by contacting the Jackson Box Office at 602-240-3161, pacbox@xcp.org, or by purchasing them at the door. There will be general seating only.

Receiving award nominations from Bropy College Prep were Jacob Browning for “Once On This Island” (Lead Actor), and Jeffrey Erdely and Tristin Wood for “Sense and Sensibility” (Supporting Actor).

More than 400 productions were considered for the awards, including shows from more than 130 different theaters in more than 60 cities spanning 12 states.

This year’s award winners were selected from nominations by a panel of more than 25 judges and reviewers. In addition to the youth who performed in schools and youth theater companies, anyone age 18 and younger who performed at a show reviewed by a National Youth Arts judge was also considered for the awards.