School bands gets boost from Fender

By Larissa Garza
Madison No. 1 Middle School’s band department was presented with a grant courtesy of Fender earlier this school year. 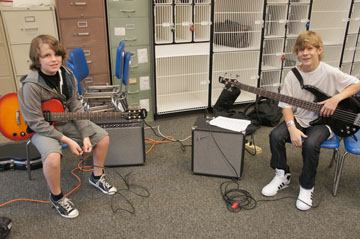 Madison No. 1 eighth grader Collin McShane, left, and seventh grader Josh Weide plug into the new Fender amplifiers that the band department received through a grant from Fender. Collin is also playing one of the new electric guitars also received through the grant (photo by Teri Carnicelli).

The Fender grant provided Madison No. 1 with two amplifiers and cords, an electric guitar and a bass guitar—over $1,650 worth of brand new equipment.

According to Kathy Coon, Madison School No. 1’s band teacher, students in the Jazz Band have enjoyed playing and experimenting on the new equipment and are eager to demonstrate for friends and classmates.

Students “love demonstrating for their friends and members of the jazz band the cool effects the amplifiers create,” said Coon. These effects could not have been possible without the new amplifiers provided by the Fender grant.

Coon applied for this grant in hopes of getting new amplifiers that worked for electric and bass guitars. Her old amplifiers were made for keyboards. Coon’s band program had not received funding for over a decade.

“Sometimes one amplifier would work and the other would not. More than once in a performance the amplifier would cut out and we would not be able to hear the student musician who was plugged into it,” explained Coon.

Coon found out about the Fender grant through Julie Palmer, whose son, Henry, is in the school’s Wind Symphony concert band. Palmer learned of the grant and thought it was a great opportunity for the Madison No. 1 band program.

“Students are being given the opportunity to try out more instruments that they would have otherwise,” Palmer said.

According to France, Fender awards these grants to schools that apply but it depends on the request as well as instrument and equipment availability. Fender has been awarding these grants since 2005. Last year alone, Fender was able to donate $220,000 worth of equipment along with a charitable partner, The Fender Music Foundation, to school classrooms, after-school programs and musical therapy programs, according to France.

With the help of this grant, Madison School No. 1’s bands have new equipment that students can use during concerts and practices, but can also be checked out to the students.

“This is a great opportunity for a fabulous band program and its members,” said Palmer.

Coon added that any funds that come the music department’s way in the future can now be invested in getting an electric keyboard that can be easily set up for concerts and can hook up to one of the old amplifiers. Right now the band has to use a full-sized piano with a microphone attached.

If you would like to contribute to the Madison No. 1 band program, e-mail Kathy Coon at kcoon@msd38.org.