The group’s commitment to paint the 20,000-square-foot ICM facility was no small endeavor. Thanks to many cash donors and several local businesses that provided tremendous support to the middle school students, the team’s goal became a reality. 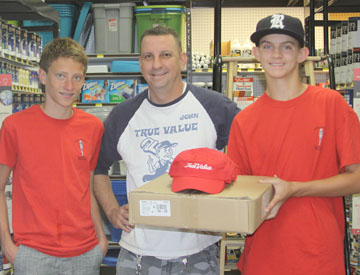 Madison Meadows NJHS students Lance Keeble and Quinn Funke receive a donation from John Koller, a partner with Barry’s True Value Hardware, to help with their “Semester of Service” project to repaint the exterior of the ICM Food & Clothing Bank in downtown Phoenix (submitted photo).

The students first spent several months researching, planning and fundraising. In the final weeks before the paint event, several local businesses generously stepped up to help the NJHS students with the final push to complete the $30,000 project. Real Property Painting of Tempe prepped the building and painted the top part of the two-story building. Ross Equipment Rental and Arizona Hi-Lift provided 45-foot boom lifts to assist the painting crew.

In addition, Barry’s True Value Hardware at 7822 N. 12th St. donated drop cloths, brushes, roller handles and hats. Home Depot at Cactus and Cave Creek roads donated 10 gallons of orange paint for the middle stripe of the building and roller sleeves for the students to use to paint the bottom part of the building.

Sherwin-Williams pitched in to the philanthropic cause by donating the remaining 106 gallons of paint, which included the upper white and the bottom gray paint as well as the paint for the doors and fences. TD Industries repaired the dilapidated gutters and downspouts.

Hungry and hardworking volunteers also had their own needs tended to, as Fairytale Brownies and Subway provided snacks and sub sandwiches to snack on while Blue Orthodontics provided water for the volunteers.

The Meadows NJHS had a vision for bringing the neighborhood community together to accomplish its goal. There were more than 75 volunteers on hand for the paint project weekend (April 26-27), including the Sunnyslope High School National Honor Society to paint the building, gates and fences. The first shift was at 7 a.m.

After the project was completed, ICM Director Renea Gentry told the NJHS advisors and parents, “I am so impressed that a large group of 13 and 14 year olds and their parents and teachers could come and do this for us, without a hitch! Any time you have another need to ‘teach the kids’ about commitment, helping others, giving back or whatever you want to call it, give me a ring!”