A renovation of the ‘Beadle Box’
Sunnyslope High School instructor Bill McClure and his cabinetmaking students recently completed a project that has some historic significance.

The students worked to restore the original Beadle Box that was built for the 1992 ASU School of Architecture exhibition on the work of Al Beadle, a renowned American “modernistic” architect who built several homes and other projects in Arizona.

The restoration now complete, the Beadle Box is on display at the Shemer Arts Center as part of the MicroDwell exhibit, which runs through March 23.

After the exhibit concludes, the small structure will need to find a permanent or long-term place to “dwell,” preferably indoors to prevent further deterioration. Those who are interested in potentially housing the Beadle Box should contact Ben Ferguson at captain_hydrogen@yahoo.com or 480-229-0828.

Ham and his administrative leadership team have brought the Madison School District to its highest level of achievement in recent decades, as evidenced by Madison receiving an “A” Label as measured by the Arizona Department of Education, being the first elementary school district in Arizona to be “Internationally Accredited” through AdvancED, and attaining multiple awards, culminating in Ham being named Arizona Superintendent of the Year for 2014 by AASA, the School Superintendents Association.

The Governing Board will conduct a comprehensive search and interview process, which will culminate in the selection of the new Madison superintendent in April. The position will close on March 7. Questions and interest can be directed to Deb Huffaker at dhuffaker@msd38.org. 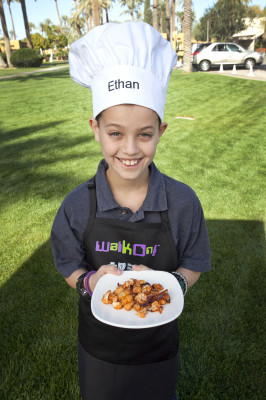 Madison Meadows student Ethan Scher, 10, was among the five finalists in the 2014 Walk On! Kids Cooking Challenge, sponsored by Blue Cross Blue Shield of Arizona. The contest was open to children ages 9 to 12, who were asked to submit their favorite healthy recipe.

A local panel of experts chose the top five entries based on the recipe’s inventiveness, taste and nutritional value. Ethan entered his recipe for “Cajun BBQ Dusted Cauliflower.”

“My mom told me about the contest because she knows how much I like to cook,” said Scher. “Cauliflower is totally underrated, and with my spices it tastes great. It’s very easy to make and it’s super healthy. And who doesn’t like barbecue?”

Phoenix community members were able to vote online for the five finalists from Feb. 4 through 12. Although Ethan didn’t win, his recipe got a lot of downloads from the voting site. To download a copy of Ethan’s recipe, CLICK HERE.

The Walk On! Challenge is a fun program that teaches elementary school students easy ways to eat better, to get enough exercise so that they can be strong, healthy and full of energy to do all the fun things they want to do (plus do well in school). For more information, visit www.walkonaz.com.

Madison team competes in regional contest
Two teams of students from Madison No. 1 Middle School participated in a regional competition on Feb. 15 to determine the team to represent Arizona in the middle school National Finals of the U.S. Department of Energy Office of Science’s National Science Bowl (http://science.energy.gov/wdts/nsb/).

The event was held at the Arizona State University West Campus in Glendale. The Madison teams faced off against 18 other schools in the regional contest. Team #1 reached second place in its division for the morning “Round Robins,” but unfortunately neither team advanced to the Double Eliminations in the afternoon.

The district bee was organized by Assistant Superintendent Patty Tate. Former Encanto librarian Lori Sanders served as pronouncer and board member Marilyn Rollins served as head judge again this year. Two new judges joined the event: Mo Bronson and Mike Hosking from Rotary 100. Bronson also has organized the Rotary reading project at Encanto and Hosking is a new member and treasurer of the Osborn Education Foundation.

Breakfast event fuels planter construction
Encanto and Clarendon Schools held the Second Annual Pancake Breakfast and Campus Clean-Up on Feb. 8. Encanto-Clarendon PTO members cooked the pancake and bacon breakfast for students, parents, and members of the community. All were well fed and well fueled to begin the work of preparing gardens for spring planting.

Last year, parents and students prepared the Encanto kindergarten and first-grade planters. This year, they followed up with second- and third-grade planters in the Encanto courtyard, and fourth-grade planters at Clarendon.
The planting done on campus adds to the overall beauty of all Osborn Schools and is a great link to the science curriculum for students.

Crossing guard gets special recognition
There is a brand new celebrity in the Osborn District. Pablo Gamboa, crossing guard at Solano School was recognized recently by CBS Channel 5 as part of the station’s “Pay it Forward” program. The segment aired Jan. 30 and again on Feb. 1.

Solano student Bailey Harris, 9, and her mother, Lisa Harris, nominated Gamboa, explaining that in five years he has never missed a day and always has a smile for everyone, rain or shine. He encourages students every morning to be good and have a wonderful day. Bailey added that he has been teaching her Spanish every day and after five years she has developed a very good vocabulary.

Bailey received a $500 check, which she “paid forward” to Gamboa—a nice reward for doing what obviously comes naturally to him. He didn’t really understand what was going on until he opened the envelope. Then he was overwhelmed with emotion.

Gamboa said he will use the $500 gift to repair his truck, which broke down a few months ago.

North students pledge to not text and drive
Students from North High School on Feb. 14 took a pledge to put their cell phones down and focus on the road as part of Allstate’s national “X the TXT” campaign. Presented by The Allstate Foundation’s local partner, Health World, the program aims to raise awareness of the dangers of texting and driving.

Allstate Exclusive Agency Owner Heather Everette and her staff discussed the dangers of texting while driving. Participants added their thumbprints to an oversized pledge banner to symbolize their promise not to text and drive.

“North High School students took a pledge to not text and drive, which significantly improves their concentration on the road while driving,“ Everette said. “No text is worth risking a life.”

Research indicates that texting while driving takes teens’ eyes off of the road for an average of 5 seconds—enough time to drive the length of a football field at 55 miles per hour blind. In 2010, teenagers accounted for 10 percent of motor vehicle crash fatalities. This equates to 11 teen deaths in car crashes, on average, every day.

Suns Dancers perform halftime show at Central
Central High School’s boys basketball game against Tolleson High on Jan. 28 had a little extra excitement, as the Phoenix Suns put on a full halftime performance inside the Central High gym. The Suns brought in their professional team of dancers and performers for a halftime show that the sent the noise level inside the gym off the charts with cheering and clapping.

The visit was part of the SunsCentral Partnership formed between Central High and Suns leadership, and was in part a reward for students in the program hitting certain goals and objectives in the first semester.
The students were given a challenge to complete more than 8,000 hours of strategic tutoring in math and literacy in the fall of 2013 to earn the boys basketball game halftime show.

Lopez, 5-foot 4-inches tall and 123 pounds, snatched 167 pounds and clean and jerked 191 pounds. He has only been lifting since August and was competing in just his second event.

His first competitive showing was in the Performance One Regional Qualifier, held in Mesa on Nov.2. He snatched 141 pounds, and clean and jerked 187 pounds, placing him in the Top 10 nationally. Lopez has been identified as a top prospect by the United States Olympic Committee.

Lopez is a member of the Metro Tech Olympic Weightlifting Club and is strong in calculus as well.

The keynote speaker was youth motivational speaker Yahya Bakkar. The 325 FFA members in attendance were inspired by his story and message of hope for the future.

Navarette, the Camelback FFA president, was chosen as a member of the Honorary FFA Mini Camp Officer team along with five other FFA members from across the state. Selection for this honor is based on leadership skills demonstrated during the camp and chosen by the mini camp counselors and advisors.

Students receive award at Robotics tournament
Sixth-grade Project Potential Gifted Program students from Orangewood School won the STEM research competition of the VEX IQ Robotics Tournament, held at Salt River High School in Scottsdale on Jan. 25. This competition was the first of its kind that students have entered. It involved both driver-controlled and autonomous (programmed) runs in addition to a STEM Research component.

The VEX IQ is a robotic system designed to engage middle school students— or in this case, the sixth grade—in learning about possibilities for the future. Students work in teams, developing, building, testing, robots that are entered into competition.

At the tournament, the students engaged their robots in challenge matches that had assigned points for specific tasks. Orangewood’s Robo-Cougars were rewarded for their STEM Research Project in which showed the initial design of a website that investigated how robots will be used in connection with sports.

They were among eight employees recognized for exemplifying the Vision, Mission and Values of the WESD. These employees serve as an inspiration to others by maintaining high customer service standards and a commitment to student achievement.

Middle school girls go to Xavier March 28
Xavier College Preparatory will host its sixth-annual “Girls Have IT Day” on Friday, March 28th from 1 p.m. to 3 p.m. on Xavier’s campus. This event is free and open to all middle school girls, but pre-registration is required. To register, visit http://ghitd.xcp.org/.

Developed by Xavier students and faculty, “Girls Have IT Day” promotes young women’s involvement in science, information technology (IT), engineering, art and math (STEAM). Approximately 500 middle school girls from around the Phoenix metropolitan area will participate, along with more than 100 Xavier students who will mentor the younger students throughout the day.

Students spend a day giving back to others
Phoenix Christian High School students went out into the community on Jan. 24 to serve in various ways.

Phoenix Christian Middle School students made more than 200 Valentine’s Day cards to be distributed at the VA Hospital and decorated baby bottles for the upcoming CPC coin drive.

Police K-9 units visit students
The city of Phoenix Police K-9 Units visited SS. Simon & Jude School on Feb. 4. Students from first grade through seventh grade saw a demonstration of one of the most important tools in the police department.

The seventh graders had recently read nonfiction text about Canine Units and this was a great follow up to that study. The fifth graders had read a newspaper article on the Phoenix Police K-9 units, so they brought their iPads to take notes and pictures. Their follow-up assignment was to write informational text on the topic.

The officers took time to demonstrate, explain, and then answer questions from the students. The dogs were impressive in their work. The students came away with a tremendous appreciation for them and their handlers who work to keep everyone safe.

All new members are required to attend weekly meeting on Friday afternoons. This new class of inductees rivals the school’s largest class of 25 members in 2010.

As an NJHS member, a student must demonstrate impeccable citizenship, service, leadership, near perfect attendance and a scholarly 3.5 grade point average. All NJHS members are required to complete 40 community service hours each year and are held to the highest expectations throughout their tenure.