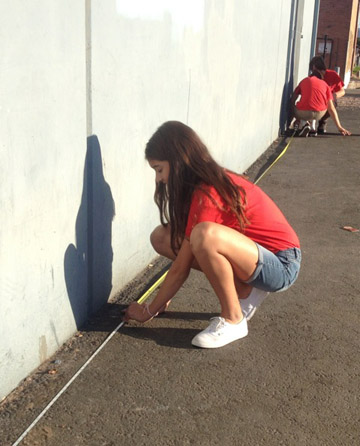 Students from the Madison Meadows National Junior Honor Society measure the outside of the ICM Food and Clothing Bank in downtown Phoenix. Students have taken on an ambitious goal for their Semester of Service project: paint the entire exterior of the building, and replace the rusted gutters and downspouts (submitted photo).

Rather than spreading their service efforts around to various programs in the community, students in Madison Meadow’s National Junior Honor Society (NJHS) decided to devote this school year’s service efforts to a single organization, ICM Food and Clothing Bank in downtown Phoenix, for their Semester of Service project.

The project began when Renea Gentry, the director of ICM, met with the students in September 2013 to share the mission and goals of the organization as well as its needs. Gentry provided ideas for direct and indirect service opportunities and advocacy. First, students could create an awareness of ICM by conducting food, clothing and toiletry drives. The second opportunity for NJHS to help ICM would be a much bigger undertaking: the 20,000-square-foot building desperately needs new exterior paint.

The students set up four sub-committees to tackle the project: Research, Resources, Fundraising and Public Relations. Students then set goals for each committee.

The Research team visited and called Home Depot, Lowes, Dunn Edwards and Sherwin Williams to ask questions and help determine material needs and quantities. The Resources team gathered ideas on how to reach out within the community to raise awareness of ICM and get the building painted by enlisting the help of other organizations such as Madison Meadows PTM, Madison Simis PATS, Boy Scout Troop #329, the NJHS groups at other schools, and local businesses.

The Fundraising team set up various school fundraisers including restaurant nights, Boo-Grams sales, a fall dance and a Toy Trot. The Public Relations team started a letter-writing campaign to local businesses soliciting both monetary donations and direct donations of food and toiletries for ICM’s clients. They also are seeking grant opportunities to raise money for the painting project.

Real Property Painting has agreed to prep the building and paint the top half of the building and the doors for a reduced cost. Ross Equipment Rental and Preferred Lighting are donating boom lifts to get the top of the building painted. The students still need to acquire nearly 90 gallons of paint, get the gutters and downspouts replaced and get the fences and gates painted.

The goal is to begin the paint and gutter repair project in late April. Fairytale Brownies has agreed to provide brownie treats to all volunteers on the day/weekend of the painting project. David Kravetz and Eileen Spitalny, the owners of Fairytale Brownies, are Madison Meadows alumni.

If you or your organization would like to help Madison Meadows NJHS with their Semester of Service project, including donating paint or other materials, contact the teacher advisor, Renee Poginy, at rpoginy@msd38.org.