St. Francis Xavier Parish and School celebrated the dedication of the third and final phase of the new school building with a special Blessing of the Buildings on Dec. 6. 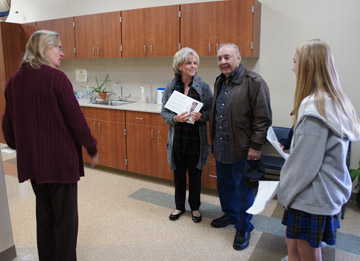 St. Francis Xavier School nurse Marie Heggestad, left, happily shows off her new nursing office to school visitors, Betsy Williams and Louis Reinhart, as well as SFX student Ana Alvarez, who was leading the woman and her father-in-law on a tour of the new school wing during Grandparents Day on Dec. 6 (photo by Teri Carnicelli).

Sullivan gave particular recognition to Phoenix-based D.L. Withers Construction for completing the new school on time and on budget.

The fundraising effort thus far for the new school has brought in $13 million of the $16 million price tag. The Etched in Our Hearts Capital Campaign began in 2005 with members of the school community, church community, parents, grandparents and alumni parents.

“The economic collapse right at the start of our capital campaign forced us to change our focus from large foundations to individuals,” Sullivan explained. “The community has been extremely generous, and we’re so grateful for what has already been contributed. But we still have $3 million to go.”

St. Francis Xavier School and Faith Education Center has been completed in three phases. Phase A was completed in December 2010 and is home to the preschool, kindergarten, middle school, gym and cafeteria. Phase B was completed in April of 2011 and is now home to grades 1-5, the atrium and library.

The music center was funded by a $134,116.44 grant from the E. L. Wiegand Foundation. The grant has allowed the music department to purchase a new grand piano, Apple iPad Learning Lab, with iPad devices to be used in the classroom, along with a complete set of risers to be used for performances.

With this grant, St. Francis Xavier will be able to expand the school’s music center beyond the day school program. The center also will be used for the parish’s religious education and adult education church programs. St. Francis will be able to impact more than 600 youth and 250 adults annually who may not have access to a technology-related arts program or a music curriculum.

School nurse Marie Heggestad was particularly pleased to show off her new nurse’s office, having worked for several years previously out of a converted storage closet. Her new office boasts a handicap-accessible restroom, two beds with privacy curtains, a wheelchair, plenty of storage, and a rear door to allow parents easy access from a back parking lot. “I feel like Christmas came early for me,” she said with a laugh.