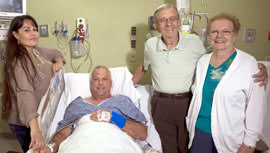 Edward Cerninka, (second from left) who is he first Phoenix Baptist Hospital patient to use the new NICO BrainPath technology, was joking with his family less than 24 hours after his brain tumor was removed. Also pictured are Stacey Cerninka, Edward’s wife; and his parents, Edward Cerninka Sr. and Rose Marie Cerninka (photo courtesy of Abrazo Health).

Less than 24 hours after undergoing brain surgery, Edward Cerninka was sitting up and chatting with his wife and parents in his room at Abrazo Health’s Phoenix Baptist Hospital, 2000 W. Bethany Home Road.

Cerninka, who is the first patient to use Phoenix Baptist Hospital’s new NICO BrainPath technology, was well enough to return to his west Valley home just two days after having a brain tumor removed.

When he first discovered he had a brain tumor, Cerninka and his wife, Stacey, were worried about the risks of surgery. His first neurosurgeon told him that could lose his speech, be paralyzed or suffer other major neurological problems. These are risks of traditional brain surgery involving deep brain tumors when brain fibers cannot be seen.

But when he sought a second opinion, he found neurosurgeon Marco Marsella, who is on staff at Phoenix Baptist Hospital and is the only Arizona physician who is trained and who has successfully used this new surgical tool. Cerninka saw Marsella in his office on Aug. 18 and had brain surgery at Phoenix Baptist on Aug. 21.

Phoenix Baptist Hospital is the first in the state to provide this minimally invasive, surgical approach to reach deep or once inoperable brain abnormalities using the new device. Marsella is among 121 doctors nationally trained to use the device.

The device allows physicians to navigate safely through the folds and delicate fibers of the brain to reach the abnormality. Physicians can target and resect, with a minimally invasive microsurgical technique, deep-seated brain tumors, abscesses and hemorrhages that could not be reached, with as little disruption of tissue with traditional techniques.

For more information, go to AbrazoHealth.com.