Two local businesses are giving back

By Patty Talahongva
Two North Central businesses offer more than what you see when you first walk in their doors. One is helping with brain tumor research, and the other is giving prison inmates the gift of reading. 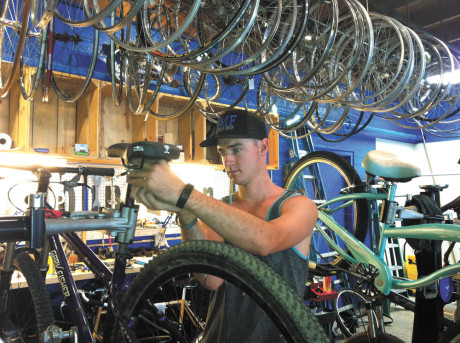 David Claffey repairs a bike in his new shop, started in honor of the memory of his twin brother, Kyle, who passed away last year from a brain tumor. Besides selling used bikes and doing bike repairs, David and other volunteer staff members of the shop also can assemble your new bike purchased elsewhere (photo by Patty Talahongva).

Grey Matter Foundation (GMF) Bicycle Shop, 5826 N. 16th St., is a nonprofit, full-service used bike shop. A percentage of its proceeds will be donated to Barrow Neurological Institute and families of those afflicted with brain tumors.

The journey from bikes to Barrow is a personal one for David Claffey. Last April, his twin brother, Kyle, lost his life to a brain tumor. Before he passed, Kyle had set the wheels in motion for the bike shop. An avid cyclist, he and his brother had worked in a bike shop since they were 14. Last summer, while he was on chemotherapy, Kyle was on a bike team that raced cross-country and raised money for Barrow. His team finished in fourth place and raised $110,000 for Barrow.

The Claffey family has lived in the North Central area for 15 years. The brothers attended Arcadia High School, where they were both on the swim team. “He was outgoing,” says David of his brother. “He always looked at the bright side of things.”

David is determined to fulfill his brother’s dream of a successful bike shop that gives back. He runs the shop with the help of family, friends and volunteers. On one particular day he gave his father, Mike, a “to-do” list that included assembling a bike, cleaning another one and a few other things.

“This is what helped us,” Mike says of dealing with the death of his son. “I kind of feel like he (Kyle) is here.”

David used social media to get the word out about the grand opening on June 7 and was overwhelmed with donations of bikes, parts, and help. “It took off faster than I could think,” he says. GMF Bicycle Shop is still accepting donations of bicycles and parts.

The business has a selection of kids’ bikes, street bikes and some mountain bikes. There are even a few unicycles. The shop also sells a small selection of new items like bike helmets, water bottles and tire pumps. If you have a flat, they can fix it. If you bought a new bike, they can put it together for you.

You can read more about the brothers at www.gmfbikeshop.org, or find the shop on Facebook at Grey Matter Foundation Bicycle Shop. Call the shop at 602-264-8820 for business hours and more information.

A love of books
One block north of the bike shop you’ll find The Bookshop, a used bookstore that sends books to people incarcerated in federal prisons. Sven Rosckowff, the owner, has been mailing books to inmates for more than 5 years.

He previously had a bookstore near 7th Street and Osborn Road, and one day a woman walked in and asked if 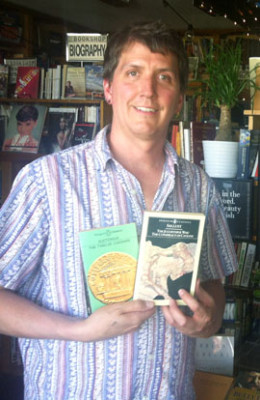 Sven Rosckowff holds up copes of two books he sent to an inmate in Nevada. His store, The Bookshop, offers this service for just the cost of shipping and handling (photo by Patty Talahongva).

he could send a book to an inmate. Rosckowff researched her request and found that it is easier for books to be ordered through a bookstore and mailed directly to an inmate, rather than family members or friends trying to send books directly to those who are incarcerated.

“So we said, sure we’ll do it,” Rosckowff recalls. It was a benefit he hadn’t thought of prior to getting that request. Since then, he’s put the notice on his website for folks who need this service. They purchase the books and pay for the shipping to their incarcerated loved one, and he handles the rest.

He doesn’t get bombarded with such requests but when he does provide the service, his actions are met with appreciation. “One woman in Las Vegas asked us to send a lot of Greek classics, like The History of Rome and Plato.” Those weighty tomes were sent to an inmate in Nevada. Rosckowff has mailed books to people incarcerated in Nevada, Arizona and Texas.

Some books are not allowed, including those on engineering, and even magazines like Field & Stream, explains Bill Lamoreaux, public information officer for the Arizona Department of Corrections. If they show maps of the area, or how to start fires or survive in the wilderness, those books or periodicals might be used in an attempted escape and therefore are not allowed, he says.

The inmate guidelines can be found at www.azcorrections.gov and the chapters on mail and inmate property are numbers 909 and 914. It’s long and detailed, so Rosckowff’s service most likely makes it easier to those unfamiliar with the process, as well as with the prohibited list of materials.

As an avid reader himself, Rosckowff says he likes knowing that he’s providing someone else with a book they can enjoy. Some of the most requested books are inspirational books or history books. “I always include a letter thanking them for their order,” he says.