By Teri Carnicelli
As she finished the last of her packing, Catherine “Cathy” Landry of North Central Phoenix said she felt both excited and nervous to be starting the next phase of her life. 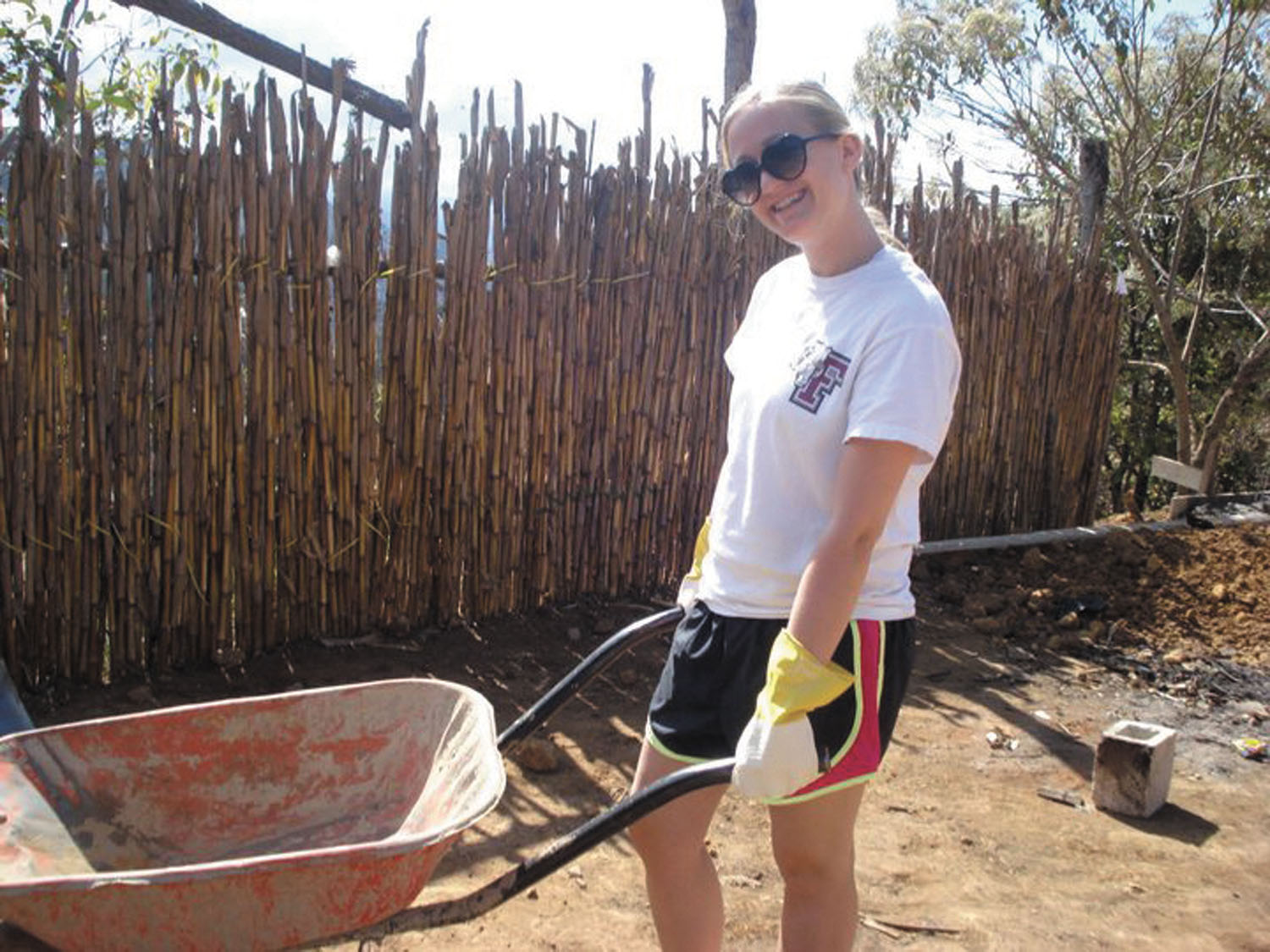 North Central native Catherine Landry grabs a wheelbarrow to help move mixed concrete inside a building to lay a floor down for a rural school during a service trip in Chipocolaj, Guatemala. She traveled there with a group from Fordham University in 2011
(photo courtesy of Cathy Landry).

Landry, 22, departed for Mozambique on Sept. 24 to begin training as a Secondary Education English volunteer for the Peace Corps. Landry will live and work at the community level to make a difference by working as an English teacher for middle and high school students.

“At this point in my life, I don’t think I would be happy doing anything else,” said Landry, daughter of Larry and Nancy Landry and a graduate of Xavier College Preparatory. “I consider it an honor to serve my country and our global community as a volunteer, and I’m thrilled to get started.”

During the first three months of her service, Landry will live with a host family in Mozambique to learn the local language and integrate into the local culture.

“The official language of Mozambique is actually Portuguese,” Landry pointed out. “I studied Spanish at Xavier and it was also one of my majors in college, so I speak it pretty fluently. I only started studying Portuguese this summer after I found out I would be going to Mozambique, but I’ll have three months of language training with Peace Corps once I get there. I think it will come pretty quickly with my Spanish background.”

After acquiring the language and cultural skills that will help her make a lasting difference, Landry will be sworn into service and assigned to a community in Mozambique where she will serve for two years. Landry will teach conversational English, and teach English as a Foreign Language, or content-based English in middle and high schools. In addition to classroom teaching, she will share resources and develop teaching materials with local teachers, and become involved in community- and school-based projects.

Landry attended Fordham University where she earned bachelor’s degrees in English and Spanish in 2014. “As a Jesuit institution, Fordham instilled in me a love of service and a sense of duty towards our larger global community,” said Landry.

But that love of service has much earlier roots. At Xavier, Landry was a member of Key Club and National Honor Society, as well as Student Council. She completed several community service projects with those organizations.

“My parents also have always volunteered or dedicated time to our Phoenix community, so I’d say I was raised with an emphasis on service to others,” Landry added.

She also became heavily involved in community service organizations on campus at Fordham University, and she volunteered at several nonprofits around New York City. She interned at the US Fund for UNICEF in New York.

Landry was a member of the Phoenix Sister Cities Youth Exchange program in 2009, when she traveled to Himeji, Japan. She also studied for a semester in Buenos Aires, Argentina in the fall of 2012.

“I knew I wanted to join the Peace Corps because I’m interested in pursuing a career in international development work,” said Landry. “Still, two years is much longer than just one semester, so I’m definitely nervous. Plus, this is the first time I’ll be abroad for an extended period of time in a developing country, without a reliable Internet connection or even running water. I expect it will be a huge adjustment.

“It’s a little overwhelming to think about, and I know it will be difficult,” Landry admitted. “I’ve never been to Mozambique or anywhere in Africa before, so it’s all completely unknown to me. While I’m sad to be going so far away from my family and friends, who have been wonderful and supportive, I’m so excited to finally have this dream come true.”