Teri Carnicelli
Jimmy Walker has spent decades working in the financial services business, which includes life insurance. So it’s a little surprising when you see the longtime North Central resident’s name associated with an event called “Celebrity Fight Night.” Such a title evokes imagery of blood, bruises and occasional broken noses. One wonders what Walker is doing associated with such a risky-sounding endeavor. 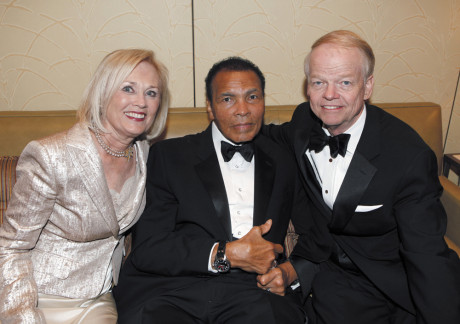 Walker attended Central High School, where he was first team All-State in basketball, and later attended Arizona State University, where he received his education on a basketball scholarship. He never lost his love of sports, which helped lead to the creation of Celebrity Fight Night, which celebrates its 20th year next month.

The original concept was to get local celebrity athletes to duke it out with oversized boxing gloves in a fun and charitable event, Walker explains.

A Phoenix resident since 1957, Walker has brought his years of experience of selling insurance to professional athletes and entertainers to his position as chairman of the Celebrity Fight Night Foundation, which he founded 20 years ago.

The mock fights that were once associated with Celebrity Fight Night have long since been eliminated, but the real fight against Parkinson’s disease, poverty, homelessness and childhood ailments continues to hold strong at this annual star-studded event, set for Saturday, April 12 at the J.W. Marriott resort near the Desert Ridge mall.

The individual ticket prices start at $1,500, which includes a private musical performance by Michael Bublé, The Band Perry, and Kenny Rogers (www.celebrityfightnight.org). Other celebrities who will be in attendance include Robert De Niro, Billy Crystal, Reba McEntire who returns as emcee, and of course the perennial man of honor, boxing legend Mohammad Ali.

“My favorite moment every year at our Celebrity Fight Night event is when I see Muhammad Ali smiling and greeting out generous guests who have supported our event throughout the years,” says Walker.

Throughout the years, Walker and his wife, Nancy, have helped more than two dozen Valley charities with proceeds from events. In addition to the Muhammad Ali Parkinson Research Center, another beneficiary this year is the Never Give Up Program, which Walker started six years ago.

“Every Monday morning since 2008, I have had the privilege of speaking as a volunteer at St. Vincent De Paul in Phoenix, encouraging about 500-600 homeless men and women to ‘Never Give Up,’” Walker explains.

Walker, who is nearing 70 years old, says he has no plans to pass the torch anytime soon. “I’m having too much fun to slow down,” he laughs, adding, “I’m not retiring, I’m re-firing!” He is joined by his wife of 46 years, Nancy, who is on the board of the Celebrity Fight Night Foundation.

Walker points out that the event itself may feature a lot of quality entertainment and celebrities, but the real meat-and-potatoes behind all of it is the foundation is raising a lot money for charities.

“It provides important assistance, and that’s how I get motivated, because we are helping people and you can see that it really makes a difference in their lives.”