Barbecue is this family’s business

By Patty Talahongva
Town Talk II Creole Style Bar-B-Q is a throwback to the days when Phoenix wasn’t much more than a dusty desert town that boasted only two barbecue restaurants. Burleigh Rideau Sr. opened the original restaurant, Town Talk, in 1949 and brought Creole-style barbecue to the city. It was located on 12th and Washington streets, and his son, Charles, says the downtown location meant all the professional people were his customers. 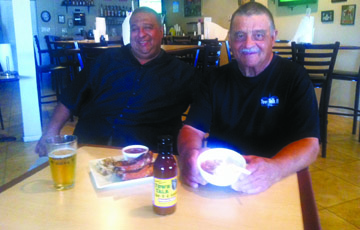 Chris Rideau, left, and his father, Charles, owners of Town Talk II Creole Style Bar-B-Q, show off some of the restaurant’s top sellers, including the half-slab of pork ribs with dirty rice and Bubba beans, the Town Talk II red ale from Four Peaks Brewery, and the peach cobbler with vanilla ice cream, as well as their signature barbecue sauce, which can be bought at AJ’s Fine Foods (photo by Patty Talahongva).

“All of the cooking was done in a big pit,” Charles recalls. “It was a difficult job smoking and cooking the meat.” Sadly, it closed in 1963.

Seven years ago Charles and his son, Chris, revived the family business and opened Town Talk II at 3509 N. 19th Ave. They use many of the old recipes and have maintained a family-like environment and attitude. “Faith, family and friends,” is embroidered on each work shirt.

The recipes come from the family’s blended heritage. Chris’ mother was Hispanic and his father, Charles, is of course Creole. Chris says holiday meals were always interesting. “Dad would make gumbo and mom would make menudo and tamales.”

Chris wanted to honor his deceased mother when he and his father opened Town Talk II, so he included a few Mexican dishes on the menu but added a Creole flavor. “I need something in here that represents her,” he recalls thinking. The tribute he came up with is his Mexi-Q section, which features barbecue tacos, enchiladas and burritos.

“It’s meant to pay a little respect—but at the same time she, might cringe to know I’m putting barbecue sauce on tacos,” he laughs.

The restaurant is well known locally for its tangy and tasty homemade barbecue sauce, which is also sold in bottles at AJ’s Fine Foods. The sauce is poured over protein that has been smoked for anywhere from four to 12 hours, depending on the type of meat. That’s the secret technique—simple, slow cooking.

The restaurant also features Fried Green Beans, Buffalo Style Rib Tips and Fried Pickles on the appetizer list. Prices are moderate with sandwiches averaging $8, entrees $12 and specials like a full slab of pork ribs for $22. You can purchase meat by the pound or have your event catered with a week’s notice.

If you would like a beer, try one on tap from Four Peaks Brewing Company. Four Peaks also makes a Pale Ale bottled just for the restaurant and it’s called the Town Talk Red.

A few years back, the Rideaus met James Hansen when he came in to eat. Hansen was so impressed with the place he told Chris he was going to be his new bartender. Chris recalls just smiling and nodding at the customer. The next day Hansen came back and convinced Chris to hire him. It was a perfect match.

“My sons have another uncle,” says Chris of Hansen’s place in the family business. They are proud of their hire and new family friend, and he echoes that sentiment.

“I’m proud of the fact that Chris and Charlie shop daily and smoke our meats daily,” says Hansen. “Nothing gets frozen, leftovers go home with employees.”

Being a family business that stays connected to its community, Town Talk II also finds ways to give back. The restaurant will host a Back to School Drive & Ice Cream Social on Saturday, July 26. It will be a “Christmas in July”-themed party to collect school supplies.

“We’re going to put up a tree, and people can bring crayons, pencils, notebooks, and other school supplies,” says Chris. The ice cream is free. “It’s just our way to give back to the community,” he explains.

And since they encourage a family atmosphere, Charles looks at a customer daintily cutting a rib with a knife and fork. “You’re not supposed to be proper,” he tells her. “You need to pick up that bone and eat.” Just like at home.

“We are a family restaurant; I want people to come in and enjoy a meal with their kids,” says Chris. And for 10 days in July (4-15), the family will take a break and head on vacation to escape the heat for a little while. Town Talk II will reopen with its regular hours upon their return.

Town Talk II is open 11 a.m. to 7 p.m. Monday and Tuesday and 11 a.m. to 9 p.m. Wednesday through Saturday. Follow them on Facebook or visit www.towntalkbbq.com.